In getting around, history 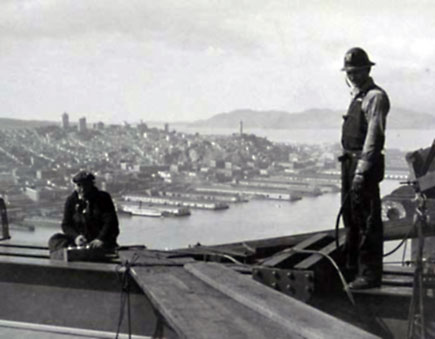 It feels like it’s taken forever, but the new Bay Bridge is finally entering its final months of construction, if reports can believed. To honor the old bridge, the Oakland Museum of California, in collaboration with Caltrans and the Bancroft Library, is compiling an oral history of the span. According to Louise Pubols, a senior curator at the museum (quoted in the SF Chronicle), “The Bay Bridge has that scrappy, underdog, proud, blue-collar identity, a lot like Oakland itself. It’s a workhorse. It gets stuff done.” According to historian Sam Redman (quoted in the same article), “People always talk about the grace and beauty of the Golden Gate Bridge, but it’s the Bay Bridge that changed the way people actually live.”

Emperor Norton had mandated a bridge connecting San Francisco, Yerba Buena Island, and Oakland back in the 1870s, but the bridge was not actually constructed until the 1930s as part of an economic stimulus program. In the early years the lower deck was used for train travel (a kind of proto-BART system). Today it’s part of one of the nation’s most nightmarish commutes, and as the new bridge adds no additional lanes this will not change. Because the Bay Area has an inadequate public transit system, it will be difficult to reduce auto traffic over the congested span. It’s too bad that current stimulus money is being put into a high-speed rail system through the central valley rather than into local urban transit that might actual get some people off the roads.

Image of construction workers on the Bay Bridge via Tumbler images