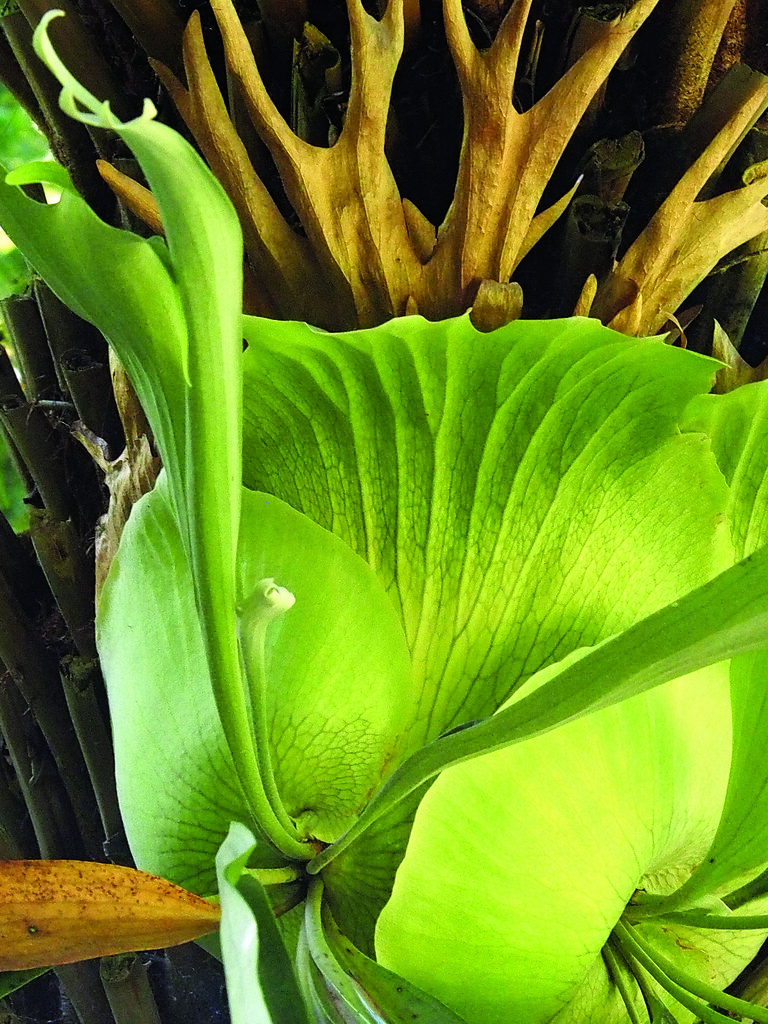 Staghorn ferns comprise eighteen species in the  genus Platycerium of the polypod family (Polypodiaceae). They are native to Africa, Australia, and Southeast Asia. This one lives by the “tree fern path” on the north side of the Australasian collection area at the University of California Botanical Garden in Berkeley.

These ferns are epiphytes, meaning they grown on the surface of another plant — in this case a tree fern — taking their nutrients from air, rain, and debris on the host (phorophyte) plant. (Sometimes gardeners attach them to boards or baskets. See A Piece of Rainbow’s “How to Grow, Mount and Propagate Staghorn Ferns” if you are interested in doing this.)

Tree ferns are ancient plants thought to have originated in the early Jurassic, when they served as food for dinosaurs. I think the host plant here is probably a fern in the Dicksonia genus, likely Dicksonia antarctica, known as the Tasmanian tree fern. It grows to about 15-20 feet tall.

James Fong, horticulturalist of the Australasian Collection at the botanical garden, has made a charming short video introducing the garden’s collection of tree ferns:

While collectively members of the genus Platycerium are all known as staghorn ferns, after a perceived resemblance to deer antlers, their shapes vary a good deal. Those with thinner fronds are sometimes called elkhorn ferns.

These ferns have two types of fronds. Wide basal fronds press against the host to protect the fern’s roots from damage or drying out. Sometimes they are shaped so as to catch and retain rain water. Fertile fronds bear spores on their undersides that enable to plant to reproduce. The two types of fronds  can be seen in this Wikimedia image by a user called ProjectManhattan:

In their native habitat staghorn ferns can get large and imposing as they grow out from their hosts. Most grow in tropical forests where they are adapted to dappled sunlight. Therefor in gardens (in US horticultural zones 9 and 10) they should be placed where they will get plenty of indirect light. At the UC Botanical Garden this specimen (which I think is probably Platycerium coronarium)  is growing in the partial shade of its host tree fern and other trees.