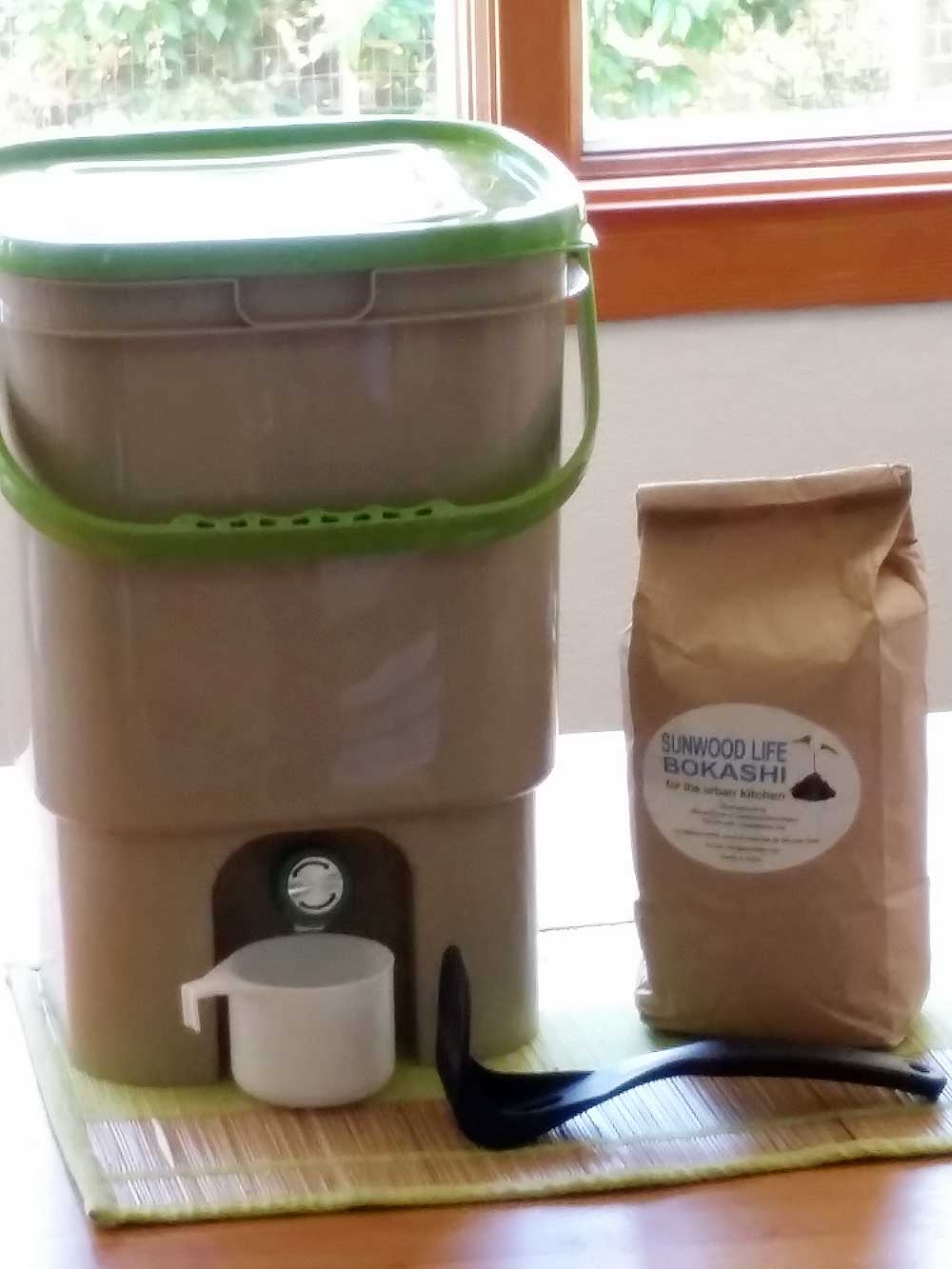 Fermentation is the bacterial and fungal process of decomposing sugars that gives us wine, beer, cheese, salame, pickles, kimchi, and so much more. Recently I made a post about making homemade ginger beer, a process that uses wild bacteria to ferment ginger brew. (The bible for kitchen fermentation is Sandor Katz’s The Art of Fermentation.) Today I would like to talk about using fermentation to safely convert the valuable nutrients in kitchen waste into effective fertilizer for the garden.

Beginning in the 1970s, Dr. Teruo Higa, professor of horticulture at the University of the Ryukyus, Okinawa, began developing a fermentation system for recycling kitchen waste in the landscape. The technique he developed, called Bokashi, is often referred to as composting, but it is different from conventional composting. Conventional composting is an aerobic decomposition process that produces high temperatures by massing nitrogen-bearing materials in such a way that air can circulate through them (so it requires turning the materials to aerate them). It can take a long time to complete, and may attract pests. Additionally, according to a talk I heard from a compost expert at Annie’s Annuals and Perennials (which has a great Saturday lecture program), composting at the home garden scale — especially if materials are added a little at the time, as is usually the case — is ineffective at producing the high temperatures needed to remove all plant pathogens and weed seeds. It is really just a process of rotting.

Bokashi is an anaerobic system. Layers of food scraps — which can include cheese, fish, meat, etc. — are alternated with a special Bokashi mix in an air-tight bucket. The Bokashi mix is a delivery system of a blend of lactic acid bacteria, called Effective Microorganisms, or EM. As Dr. Higa explains in a paper he wrote about the system, it is “a mixture of microbes, using the very common species found in all environments as extensively used in the food industry–namely Lactic Acid Bacteria, Photosynthetic Bacteria and Yeasts.”

After the bucket is filled with alternating layers of food scraps and Bokashi mix, the mixture needs to sit for a couple of weeks before being used in the garden. At that point you have a few choices. You can bury it in soil. You can add it to a comventional compost bin. Or you can use it in containers (fill the container a third full with potting soil, add an equal amount of the finished Bokashi and food waste material, mix, and top with potting soil).

The Bokashi system I purchased looked like this out of the box: 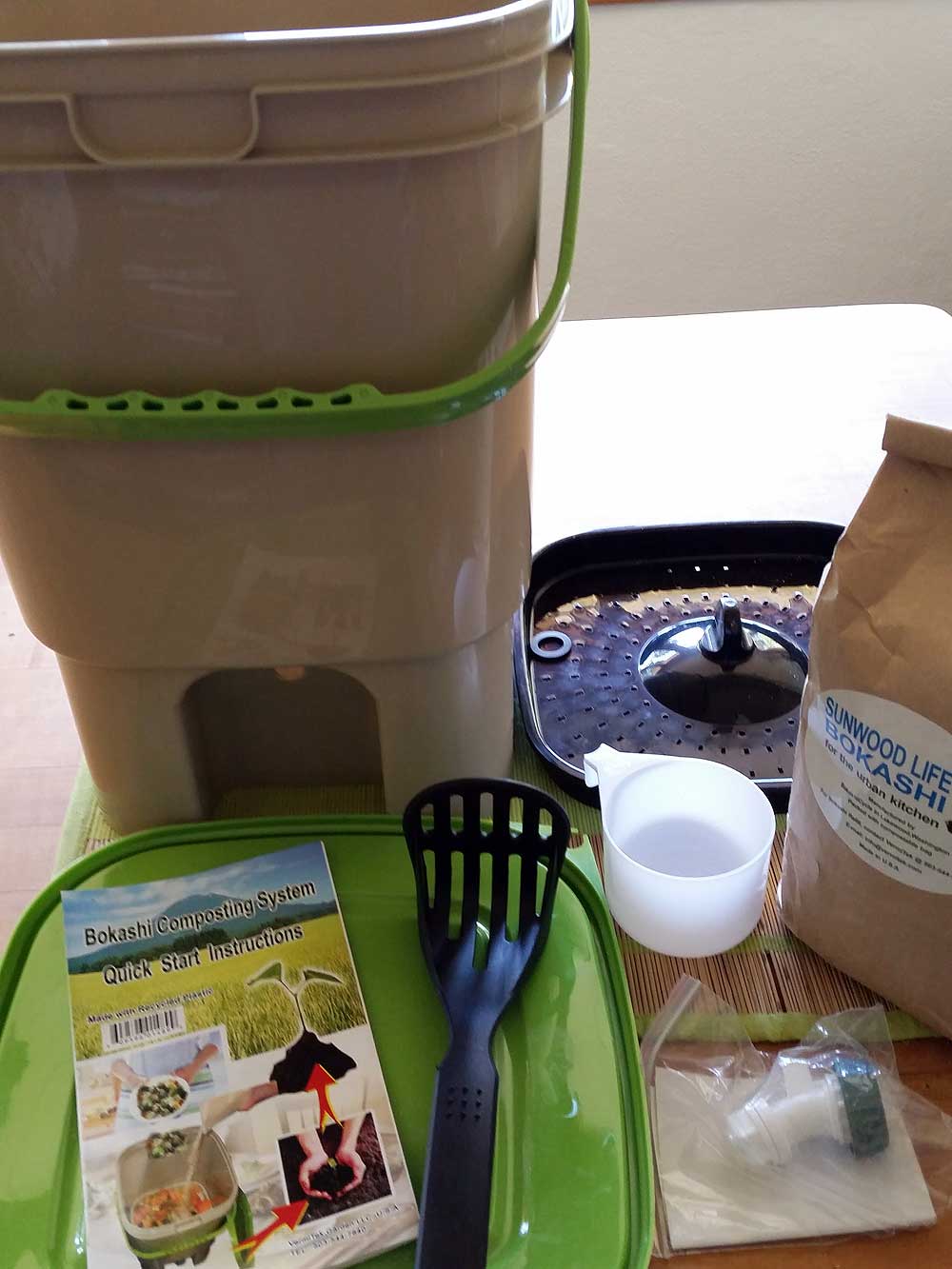 To understand the Bokashi process, it’s helpful to watch some videos. I watched a bunch so you don’t have to. These are some of the better ones:

Lish Fejer of Green It Yourself provides a good overview of the Bokashi method:

Here’s another overview. While I didn’t get my system from Peaceful Valley, who are based in Grass Valley, California, I have bought from them with good results.

If you want to make your own Bokashi starter, Al Pasternak of My Vancouver explains the process.

Finally, Dougal Pollock shows what happens to the Bokashi mixture after it is dug into the soil.

And there you have it. Bokashi: An organic system for recycling food waste, benefiting the home, the garden, and the planet.