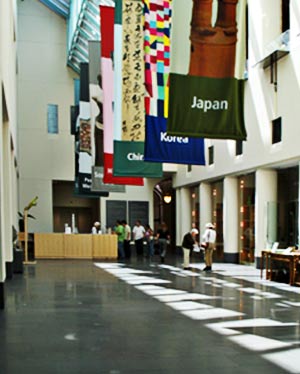 I have in front of me some travel guides to San Francisco. I’m curious to see how they cover the city’s museums, and specifically the Asian Art Museum (hereafter AAM), because I will be putting up a page on the Asian (as it’s commonly known) soon. The results are interesting. Here’s a selection:

Is the San Francisco Museum of Modern Art twelve times better than the Asian Art Museum? If you travel to San Francisco 13 times, should you visit the Asian once and SFMOMA all the rest? Comparisons, so they say, are odious, and I don’t want to run one institution up by putting another down. SFMOMA’s collection has improved a lot over the past couple of decades, and with its spacious newish building in an attractive location it is likely to continue to improve, despite recent management problems. As a Bay Area resident I would love to see the museum become a truly great one.

But it’s the Asian Art Museum that has the best art collection in town. The core of the collection was donated to the city by Avery Brundage (a Chicago industrialist and head of the International Olympics Committee). Brundage put the collection together when not many people were collecting Asian Art, and before many art trade restrictions were put in place. He benefited from his international connections (for example, because he was instrumental in having the 1964 Olympics hosted in Japan — that country’s first big international event since World War II, and the first time the Olympics had been hosted in Asia — he was allowed to acquire some national treasures that would otherwise have been impossible to obtain). Today a collection comparable to Brundage’s could not be assembled at any cost.

The Asian has also been persistent in expanding its collection, recently acquiring significant gifts of Indian prints, Sikh art, Japanese bamboo baskets, Chinese calligraphies and paintings, and Southeast Asian art, to name a few; the Brundage collection now constitutes about half of the museum’s total holdings. The collection is San Francisco’s second most valuable asset after its real estate. The museum is one of the largest outside of Asia devoted to Asian art. It is housed in a historic building in Civic Center that was redesigned by Gae Aulenti (whose other projects include the Musee d’Orsay in Paris) and restored and expanded at a cost of about 170 million dollars.

Why do the guidebooks give short shrift to what is clearly one of the region’s most significant cultural institutions? Let’s not attribute it to plain prejudice. Instead, let’s say they perceive the museum as a “niche” institution. We might examine that. Asia is the largest region in the world, home to three-fifth’s of the world’s population. It embraces cultures as diverse as South Asia, West Asia, Southeast Asia, the Himalayas, China, Korea, and Japan. The museum’s holdings span six millennia of history. (They include the world’s oldest dated Chinese Buddha.) What’s more, under the museum’s current director, Emily Sano, the AAM has been engaged in a strong program of presenting modern and contemporary art by Asian artists.

So which museum is a niche institution?