Fratricide by the bay 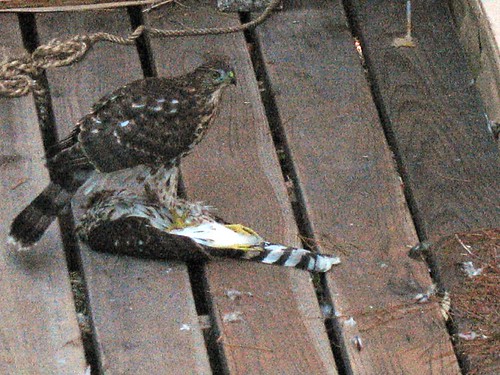 But I’ve seen worse. Just the past weekend. In my own backyard.

I mean, the Mitchells weren’t cannibals, as far as I know. Apparently the same can’t be said for Cooper’s hawks. Four of the birds have been inhabiting my backyard this summer. They must have hatched from the same nest this spring. They got big fast, and our squirrels and finches have been looking nervous, keeping a wary lookout. These fierce birds squeeze their prey to death with their sharp viselike talons.

So this weekend I went out back and found that now we have three Cooper’s hawks — one of them was feasting on another. After I took the picture above it picked up the dead bird and flew away with it, as if it were but a single feather.

Not exactly a bambi moment.