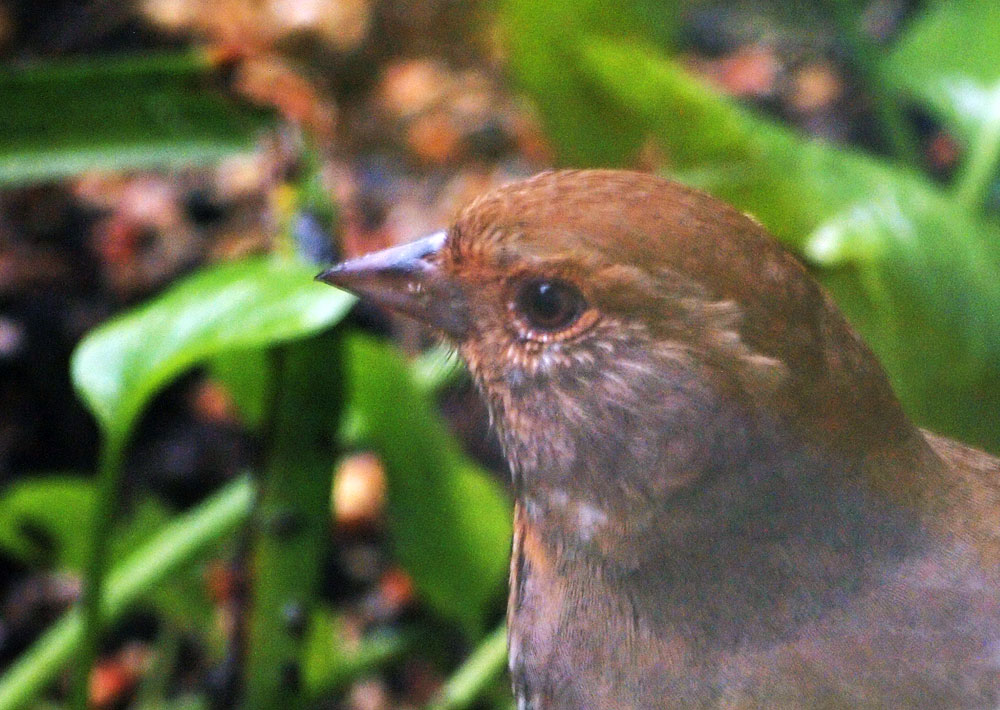 This dark-eyed little beauty appears to be a Brown-Headed Cowbird. Despite the finch-like bill, she is a kind of blackbird, the smallest in North America. The males are darker, with a metallic tint.

Like most blackbirds, cowbirds are social. But they have been chided for their seemingly Bohemian lifestyle. First, they are fully promiscuous, not pairing up like many birds. In the spring the female attracts a number of suitors, who hang out on treetops and whistle at her. It’s the avian version of bro culture. According to the Cornell Lab of Ornithology, these dudes are “noisy, making a multitude of clicks, whistles and chatter-like calls in addition to a flowing, gurgling song.”

The female will soon need a nest, and she looks around for a nice one, figuring why construct one when there are ready-mades around for the taking. Finding a suitable nest, she removes one of the existing eggs and replaces it with her own. Then she goes on her merry way, leaving the young to be raised by foster parents. Typically larger than the host, the young cowbird will crowd out and starve the other chicks. Meanwhile, the female keeps running around. She may lay three dozen eggs in a season, in as many nests.

I don’t think cowbirds are native to my coastal area. They have expanded from inland grasslands. According to the Audubon guide, “Centuries ago this bird probably followed bison herds on the Great Plains, feeding on insects flushed from the grass by the grazers…. Heavy parasitism by cowbirds has pushed some species to the status of ‘endangered’ and has probably hurt populations of some others.”