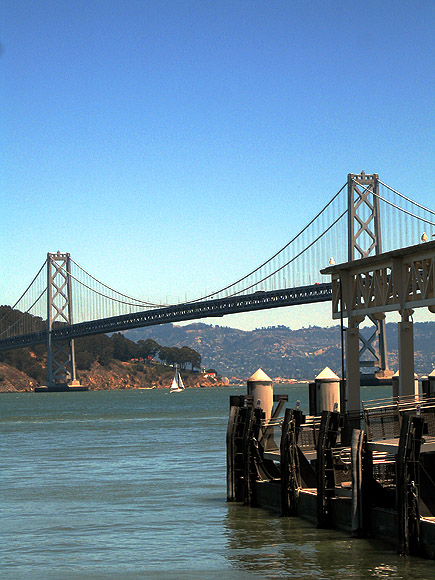 I took this photo of the Bay Bridge from the Ferry Building. But a while ago when my daughter was at the Ferry Building she was accosted by a security guy as she was shooting pictures. I suppose much of my photography is travel photography, whereas Ellen is more of an art photographer. So she might shoot unusual subjects, sometimes from odd perspectives. In this case she appears to have pointed her camera the wrong way, because a security guy grabbed her and tried to intimidate her with a a lot of questions. Then he took her to his supervisor, and together they continued the interrogation, which ended with them taking down a lot of her personal information.

Well, it turns out the Department of Homeland Security has a secret list of buildings that must not be photographed — but they won’t release the list. Marc Fisher quotes a police chief in the Washington Post:

I am certainly not implying that a person taking photographs is inherently “suspicious,” but when the appearance is that the subject of a photograph is a government installation, officers have a duty to ensure the safety of the occupants of this structure.

To which Fisher replies:

Hmmm. Any government installation? This overly broad approach to security is why we end up with ridiculous horror stories about innocent tourists getting hassled for taking photos of the Lincoln Memorial or the Department of the Interior … utterly ignoring the fact that the Soviet empire collapsed under the weight of its own paranoid security apparatus….