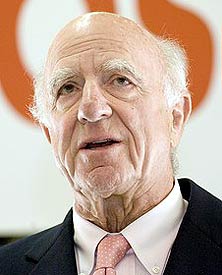 Gap founder Donald Fisher’s announced intention to build a new museum in the Presidio has been widely reported. Namastenancy has posted a good summary. Apparently Mr. Fisher has a fine collection of modern and contemporary art, although it is difficult to tell at this time “whether the Fisher collection has institutional quality, like the Frick, the Barnes, the Hirshhorn, the Phillips, the Mellon (the National Gallery),” as Howard Junker asks, “or whether it will be merely a beau geste like the The Hess Collection (in Napa) or a dreadful provinciality like the di Rosa Preserve (also in Napa).”

But let’s say the collection is world class. There are still some things about this story that I find a little disturbing. First, Mr. Fisher negotiated with both SFMOMA ad the Fine Arts Museums to donate his collection to one of San Francisco’s existing museums that feature modern art. Negotiations in both instances proved fruitless. Maybe the problem was just finding an adequate space for the collection. But it doesn’t sound like that was the biggest stumbling block. Instead, it sounds like Mr. Fisher wanted to dictate curatorial content: what is displayed, when, and how. Money speaks in this town, but should it curate our art in this blatant a manner?

Second, the plans call for a 100,000 square foot museum, with more gallery space than SFMOMA. That sounds great, but the Presidio is a city treasure, and I fear this is another step in its destruction. Isn’t this too large a museum for the location that is proposed, especially considering the massive parking structure that will no doubt come with it?

The image of Don Fisher is taken from an interesting article by Daniela Kirshenbaum that appeared on Fog City Journal.