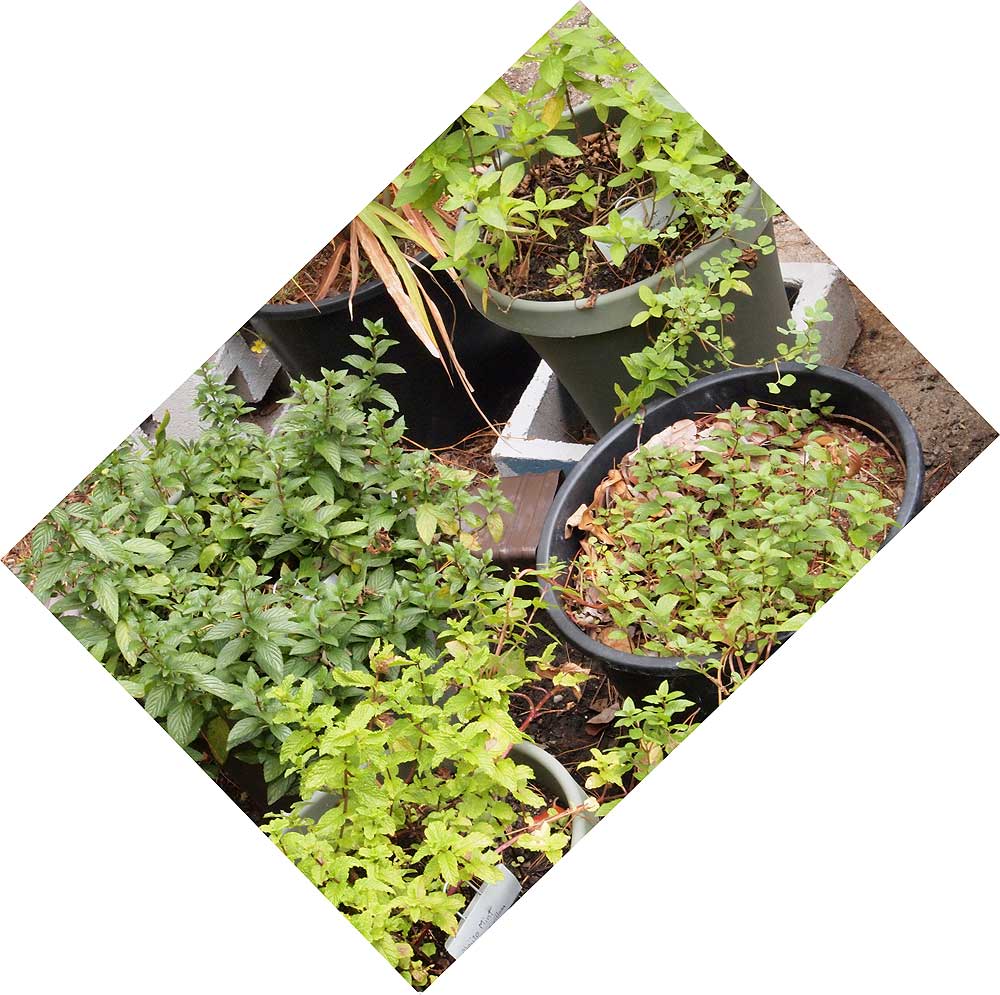 I like growing mint. For one thing, it’s easy. For another, many varieties are available, some of which you would otherwise be hard pressed to find. Here we see Vietnamese mint, Spearmint, Mojito mint, and Peppermint.

These are all different species in the Mentha genus (part of the large Lamiaceae family, which includes such herbs as basil, rosemary, sage, oregano, and catnip). Plants in the this genus have opposite leaves and square stems. And they are highly aromatic. (Mint oil is sometimes used as an insecticide.)

All of these mints began as small plants from Richter’s Herbs, based in Goodwood, Ontario. Mint tends not to come true from seed. Richter’s says that peppermint flowers in particular are sterile, so that true peppermint cannot be grown from seed at all. Best to start with seedlings rather than seeds.

Mints are perennials. I grow them in containers because in the ground they can become invasive and crowd out other plants. They spread by underground runners. (I should probably transfer these to broader, shallower containers.) They like moist soil, but mine have done best in a fairly sunny location.

Tasting mints side by side, most people are surprised by how much the flavors vary.

MOJITO MINT (Mentha x villosa) was once difficult to get in North America. According to Richter’s, “thanks to Toronto mojito enthusiast Catherine Nasmith who visited Cuba in 2006 we now have the authentic plant from Cuba. It is clearly different from most other mints — its scent and flavour are agreeably mild and warm, not pungent nor overly sweet like other mints.” I agree that this mint is excellent in mojitos and other cocktails.

After Mojito mint, PEPPERMINT (Mentha x piperita piperita) is the best for cocktails. It has the most menthol of these mints, which makes it feel cooling. It also makes a great tea, good for digestion. This one has done the best for me in the garden.

SPEARMINT (Mentha spicata) is good for cooking. It’s the preferred mint in Greek cuisine, for example. It’s said to be “milder” than peppermint, but this just shows the poverty of culinary vocabulary in this area, as the flavor differences between the plants are complex. BTW, if you buy something that is just called “mint,” it’s most likely spearmint (sometimes a blend).

It is claimed that peppermint contains 40% mentol, versus .05% in spearmint.

Richter’s offers many more mints. It might be time for me to add a few more.