Hikers in the Wildcat Canyon hills above the city of Richmond may be surprised to come upon a glade full of palms and other exotic trees amid the chaparral and oak woodlands. 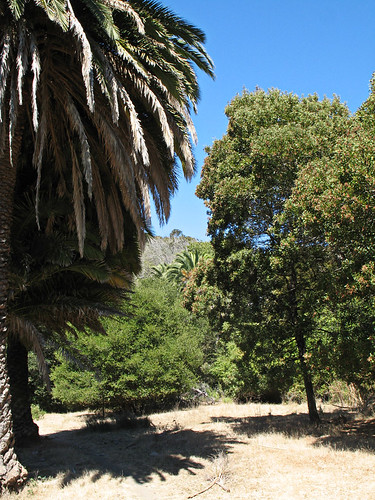 These are the vestiges of a sanitarium that overlooked the bay, with views of San Francisco to the south southwest 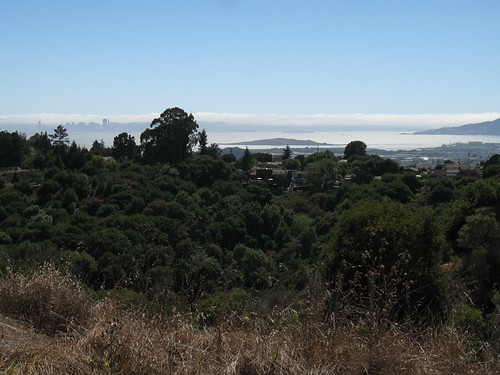 and Richmond to the west. 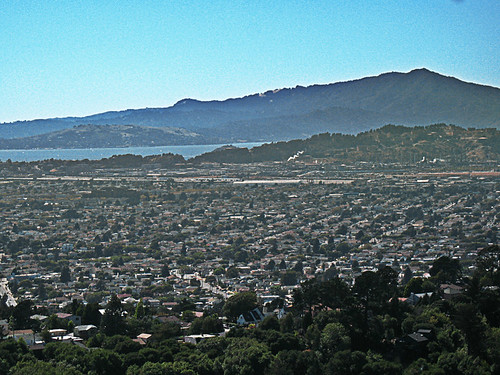 This was the location of the Grande Vista Sanitarium, founded by Dr. Hendrik Belgum in 1914. Residents of the sanitarium included drug addicts and alcoholics as well as the mentally or emotionally disordered — neighbors called it “the crazy house.” The sanitarium, advantageously located, catered to an up-scale clientele who wished to keep embarrassing members of their families out of view.

The centerpiece of the property was a large stucco mansion originally built by Jacob M. Tewksbury, a wealthy pioneer. Guests entered through a high-ceilinged foyer decorated with Tiffany chandeliers. Other features included a day room, library, kitchen, living room, and formal dining room. A curving staircase led to bedrooms and offices — nearly all with magnificent views — on a second floor.

One of these rooms served as Dr. Belgum’s office. As years went by, the doctor himself grew more and more eccentric and reclusive, preferring the company of his patients to that of the people he met on his expeditions into town. Neighbor children brave enough to sneak up to the mansion reported being spellbound by strains of enchanting music cascading down the hillside. It was said that the doctor and his ethereal sisters enjoyed dancing with the patients as the setting sun would cast its golden glow across the bay below them.

According to one of the doctor’s brochures, “To insure our guests an abundance of fresh, wholesome, nourishing food, so essential to the restoration of health, a select purebred dairy is maintained, also a poultry plan, an apiary, a fruit orchard, vegetable gardens, conservatories, private spring water system, etc.” Remains of some of the foundations can still be seen on the site.

In 1948 a grass fire suddenly flared up and threatened the idyllic estate. Dr. Belgum fought desperately to put out the blaze, and in that struggle he gave up his life. Then the mansion passed to his brother, Bernard N. Belgum, and sisters, Ida Ruth Belgum and Christine Heiman. A few patients remained with them as those melancholy years dragged on, though the surviving Belgums had no medical qualifications. As the turmoil of the fifties and early sixties raged in the cities ringing the bay, the sanitarium, in its remote setting, seemed frozen in time.

After Bernard’s death in 1963 at the age of 82, no heirs remained to inherit the estate. The grounds were simply abandoned, and all of the buildings had been burnt down by vandals by 1977. The following year, the East Bay Regional Park District acquired the land, which is now part of Wildcat Canyon Regional Park.

This part of the park is used for grazing cattle, who tramp down the hills above the sanitarium. 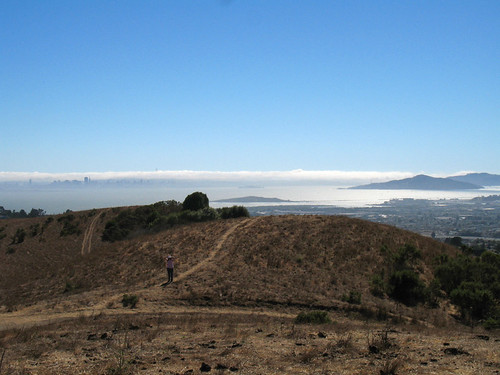 The sanitarium’s palms can be glimpsed beyond the thistles that grow where the cattle graze. 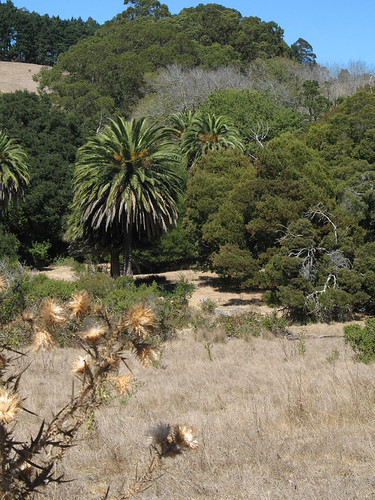 To reach the site, take the Belgum trail from the Alvarado staging area in the Richmond hills. 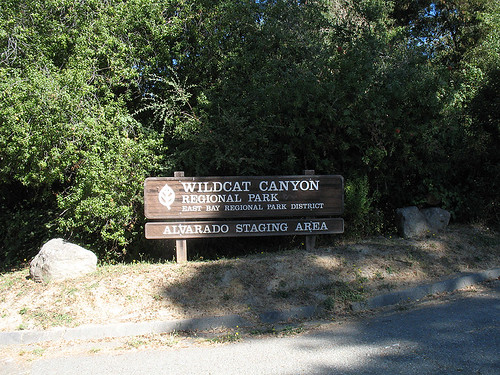 A nearby display gives the history of the site. There is little material readily available about the Belgum sanitarium. (I have put up a few more pictures in my Belgum flickr set, which also contains larger versions of the images here.) Chad Dickerson of Yahoo posted some information about it, and consequently has been termed an “authority,” but really he just reprinted the material that is available at the site and does not appear to have done any original research. Still, he did post the materials from the site in their entirety, whereas I have been selective and have also added some narrative touches in order to tell the story of the sanitarium in a way that appealed to my imagination.

A more promising source of information is the El Cerrito Historical Society, which cites a publication called Richmond: Windows to the Past by Susan D. Cole (Contra Costa County Library, 1980). It includes “pictures and vignettes about early Richmond, including perhaps the best information available on the Belgum family’s Grande Vista Sanitarium, which was located near the mouth of today’s Wildcat Canyon Regional Park.” The Richmond Public Library probably has a copy, but I have not consulted it.