In getting around, news

I am hereby calling for a criminal investigation of CalTrans and the Bay Bridge repair contractor, C.C. Myers Inc. It’s a miracle the failure of the bridge repair did not kill several people, less than two months after the original repair work.

Blaming yesterday’s moderate breeze — in the 20-30 mph range around the bridge — is unacceptable. The original bridge lasted for 70+ years in all sorts of weather conditions. The bridge has to be functional every day, not just in good weather.

Someone has to have been criminally negligent in this incident.

UPDATE: Go here for an excellent rundown of the problem and its repair.

I suppose there is some comfort in knowing that some things never change. More than thirty years ago, in the movie All the President’s Men, Jason Robards as WaPo’s Ben Bradlee dismissed a proposal for a feature recapping yesterday’s weather for people who were too drunk to remember it by saying “Try selling it to the San Francisco Chronicle, they need it.”

Since then the Chronicle was bought by — or merged, with, I forget the official line — the Examiner. It was, in any case, a sham deal that made both papers worse.

In 2003 I cancelled my Chronicle subscription out of frustration over their coverage of the build-up to the Iraq war (an ineffectual protest, since as a newspaper junky I usually buy it off the racks, God knows why).

Today the Chronicle reaffirms its commitment to wrong-headed editorial decisions. What is the top news of today? Let’s see what Google News is picking up from papers around the nation and world:

Yep, it’s the Mumbai attacks, in which more than 115 160 people were killed and more than 300 370 injured. You know, the ones that presage new terrorist tactics, raise tensions between two nuclear powers, and threaten to destabilize the South Asian region and damage American interests and influence there.

Most papers have this as their lead, or at least the second story on their front page (I admit I haven’t check all 7,255 news articles picked up by GN). Where is it in the Chronicle? Let’s see (rummage, rummage . . .) Ah, here it is — on page 19.

The Chronicle‘s lead story on page one is about a land use law that Gov. Schwarzenegger signed into law in September. Its other front page stories are about an oral history project, an increase in charity Thanksgiving meals, and stores that are reviving layaway plans.

I don’t understand this paper.

I went over to City Hall over my lunch hour today and caught the press conference and celebration over the Supreme Court’s ruling that marriage does not depend on sexual orientation. I recorded some parts with my cell phone’s video — the quality is not the best but some of the spirit of the event might come through.

Here is what the Chronicle says about their choice:

The American political system needs a period of reprieve and renewal.

It needs a reprieve from a White House that draws power from fear, sneers at any science that gets in the way of corporate or theocratic missions and stubbornly adheres to policies that leave the nation sinking in debt and mired in war. It craves a reprieve from the politics of bloodsport that prize clever calculation over courage, winning over principle, party label over national interest.

The renewal must come from a president who can lead by inspiration, who can set partisanship aside to define and achieve common goals, who can persuade a new generation of Americans that there is something noble and something important about public service.

There is no doubt about the Democrat with the vision and skills to bring that period of reprieve and renewal. It is Sen. Barack Obama.

As is often the case in a heavily contested primary, the relatively modest policy differences among the candidates have become magnified and inflamed beyond all due perspective. For example, Obama, Sen. Hillary Rodham Clinton and Sen. John Edwards have pledged to expand health coverage, albeit with somewhat different approaches. Obama’s is certainly the most cautious, though perhaps the most realistic, considering that any overhaul of the health care system would require buy-in from at least some Republicans and myriad business interests that would be affected by such landmark federal regulation.

All three have vowed to phase out the U.S. military presence in Iraq. Obama, however, stands alone in his opposition to the invasion at the outset. Clinton and Edwards each voted to give President Bush the authorization to use military force against Saddam Hussein. Edwards acknowledges his mistake, Clinton parses the meaning of the resolution. It was Obama’s instincts that proved sound.

Clinton, who arrived in the U.S. Senate four years before Obama, has tried to make experience the issue. As senator, she has proved skillful at representing diverse New York interests and working with Republicans. But if she wants to highlight her White House experience as a defining difference, then it’s only fair to point out that two of the projects she was most deeply involved with produced a debacle (health care) and scandals (fund raising). Especially in recent days, her campaign has shown the sharp elbows that evoke the ugly underside of the Clinton years, and the (Karl Rove inspired) Bush years that succeeded them: the reflex to scorch the Earth, to do what is necessary to vanquish political adversaries … all is justified if you are left standing at the end.

America deserves better than these cycles of vengeance and retribution. Its possibilities are too great, its challenges too daunting, for partisan pettiness.

In a Jan. 17 meeting with our editorial board, Obama demonstrated an impressive command of a wide variety of issues. He listened intently to the questions. He responded with substance. He did not control a format without a stopwatch on answers or constraints on follow-up questions, yet he flourished in it.

He radiated the sense of possibility that has attracted the votes of independents and tapped into the idealism of young people during this campaign. He exuded the aura of a 46-year-old leader who could once again persuade the best and the brightest to forestall or pause their grand professional goals to serve in his administration.

Of all the candidates who talk about change, Barack Obama has made the case most forcefully and most convincingly. He gets our endorsement for the Democratic nomination. 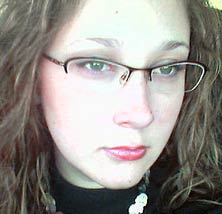 KPIX, television Channel 5, has hired a full-time blogger named Brittney Gilbert. This is the first blogger hire by a local newsroom. Knowing how old-school journalism types think, I’m sure they see blogging as a way to reach a youth demographic and can’t imagine that older folks would read a blog. And sure enough, I see that Gilbert graduated from college in 2002.

Jim Parker, KPIX’s Director of Internet Operations, says, “Think of Brittney as the Web equivalent of a newspaper columnist, but with robust community involvement,” Parker says. “We also plan an automated blog aggregator and the opportunity for user comments, all to launch sometime after the first of the year.”

I wish her well, and I trust her KPIX blog site will not be as self-focused as her current blog is.