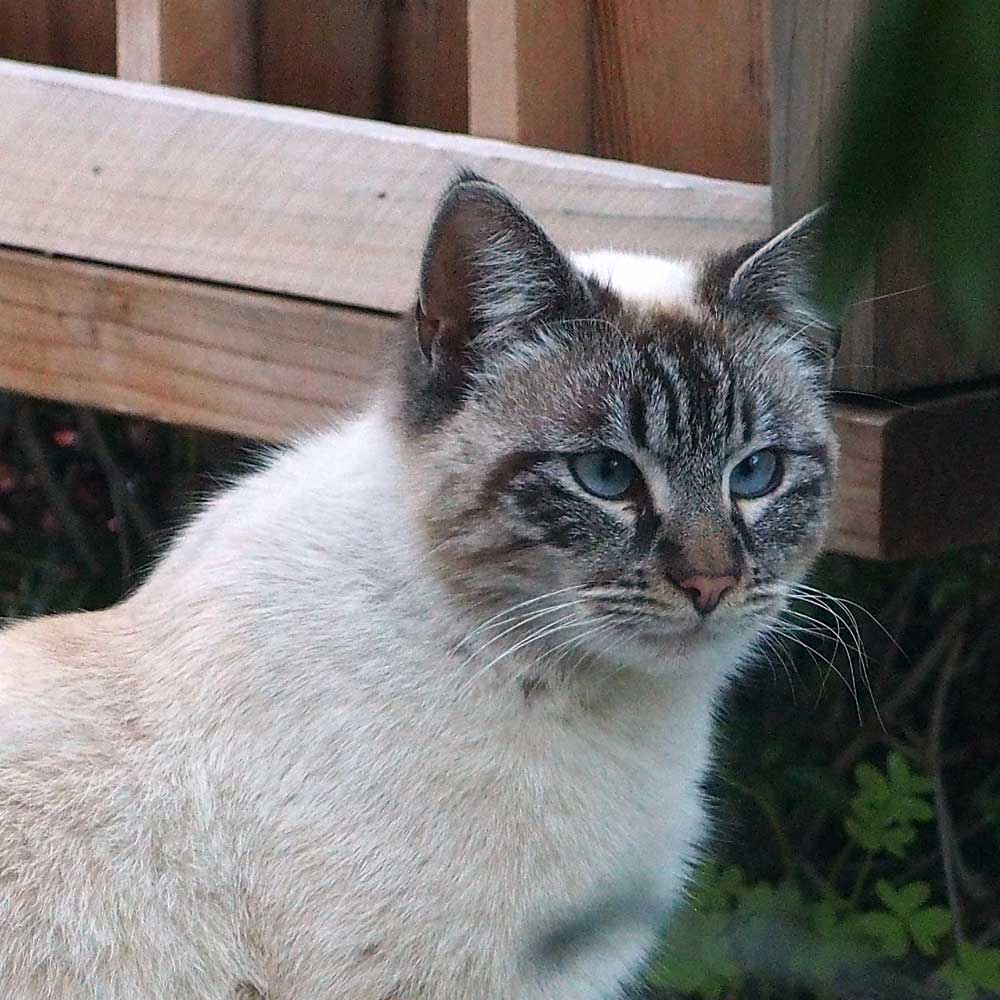 A dashing new visitor to the garden. 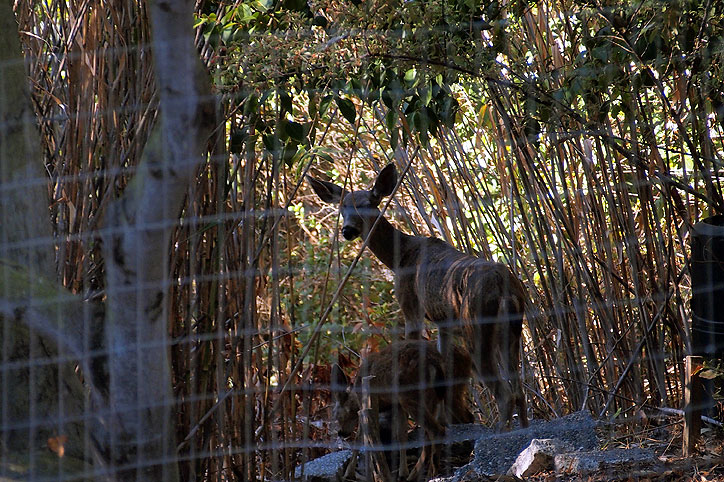 Okay, I got a little overconfident. We hadn’t had much deer damage in several days, and I needed to access the tomatoes. So I half opened up the cage I had put around them. That same night the deer ate all approximately 120 Sungold tomatoes, the damned gluttons. That was the last straw! (Also, the last tomato.) I constructed a seven-foot deer fence, which I had been putting off doing because of the difficult length and slope of the property. (This version of the fence is still a little improvisational, and  eventually I will do a more attractive version.)

Now I have the enormous satisfaction of watching the wildlife down in the back forty, knowing that they are not getting into the garden.

Physical barriers are the only way to control deer. Forget all the other supposed solutions. 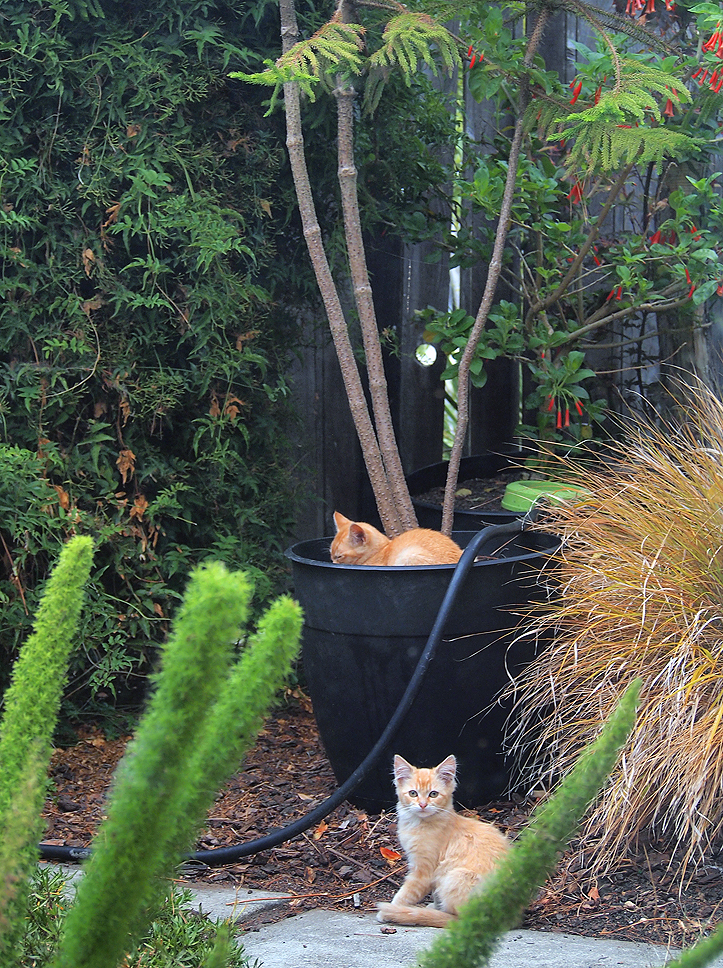 Thanks to the neighborhood cat lady, we have an abundance of more or less free-range felines in our area. One found a cozy place to nap in the Norfolk Pine container (which probably had a nice layer of compost on top). The catnapper was soon joined by a more vigilant sibling.

In the front left is Protasparagus densiflorus ‘Meyeri’ (foxtail asparagus fern). At the right is a handsome speciment of Stipa arundinacea (New Zealand Wind Grass), which does marvelously well in this area, even during the drought. (I recently saw quite a few of these planted along the bay walk in Pacific Grove near Monterey.) Along the fence is true jasmine, and behind the Norfolk Pine (Araucaria heterophylla) in another container is Iochroma coccinea, with its tubular orange flowers. 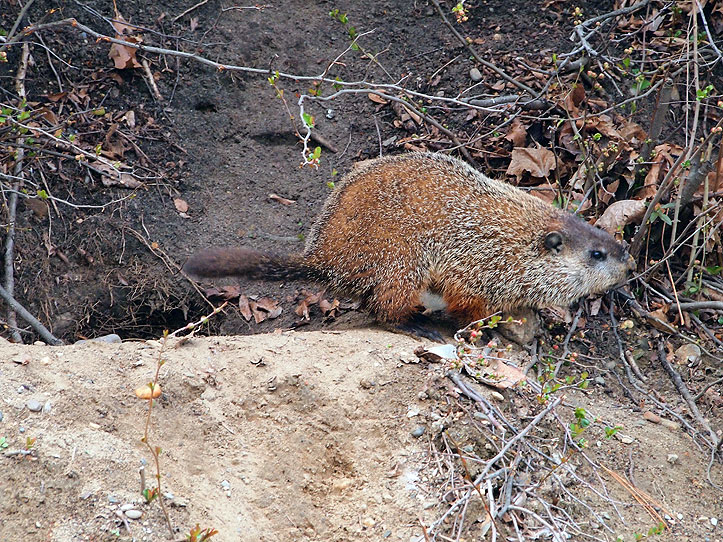 Slater Mill (shown below) in Pawtucket, Rhode Island, was the birthplace in America of both the Industrial Revolution and the American labor movement, thanks to a strike at the mill by its women workers. It’s also home to a couple of handsome groundhogs, including this one. 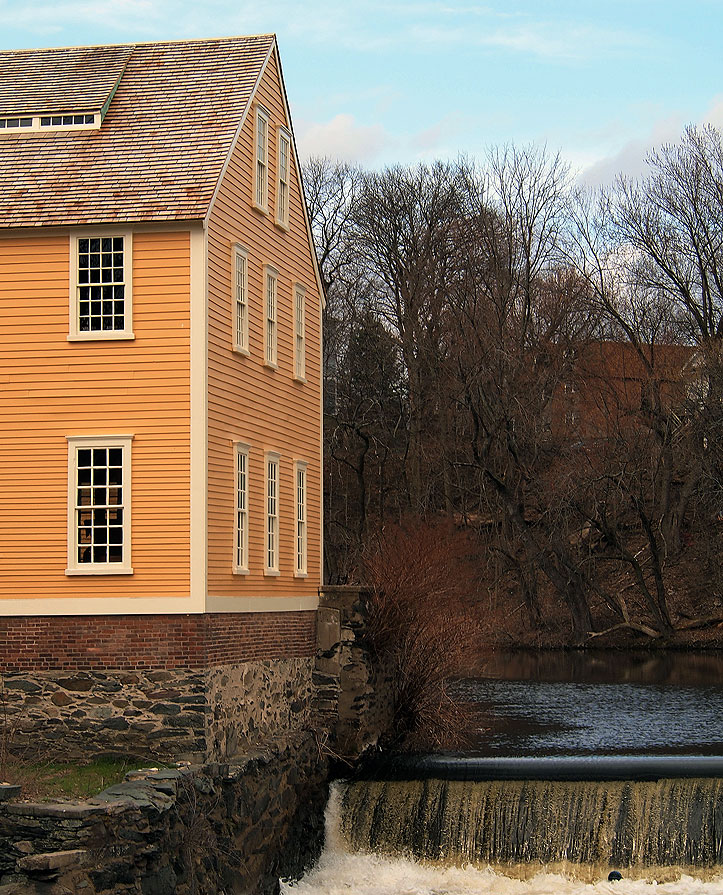 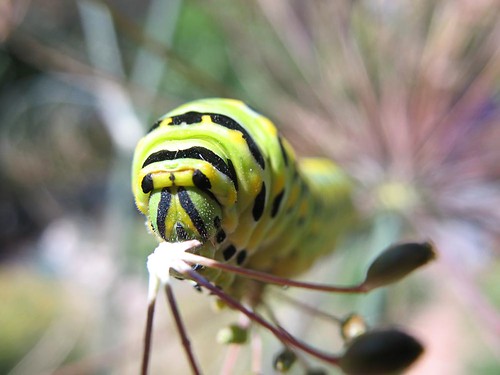 Since converting our swimming pool to a garden we have had a lot more wildlife around. This year two pair of kestrels have taken up residence. We also have a lot of butterflies, beas, and hummingbirds.

This caterpillar is a swallowtail. They like plants in the carrot family, and this one was enjoying a lunch of dill. Eventually he will turn into a butterfly that will look something like this. 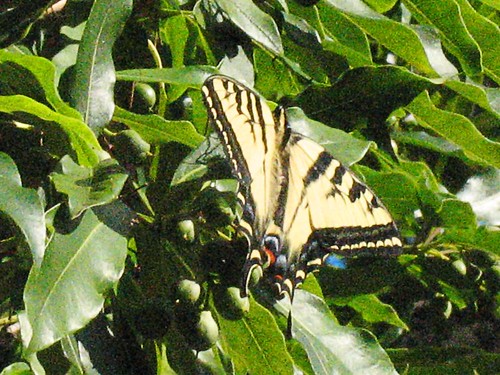 There are a few more photos in my nascent garden set on flickr. 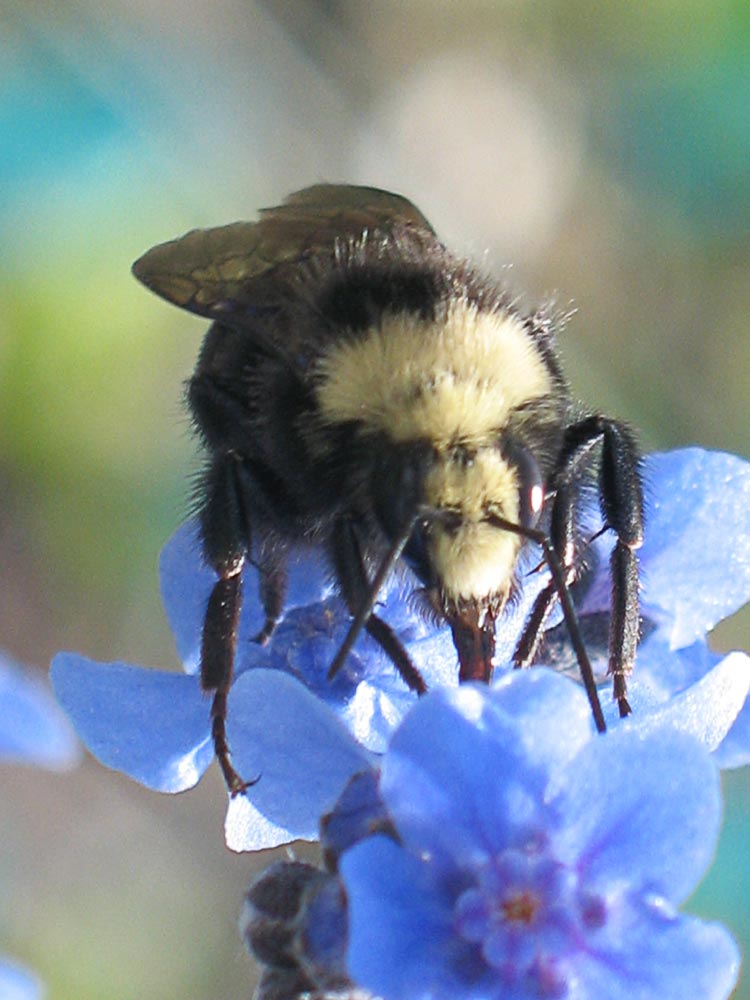 We have many bees, butterflies, and hummingbirds in the garden this year.

North of Cambria is a stretch of coastline accessed by Moonstone Drive. The drive is dotted with motels. As along much of California’s coast, highway 1 is all too near. But the coast itself is scenic, and sea otters may be seen. At this time of year whales migrant along the coast here, and they are often spotted surfacing and spouting offshore. 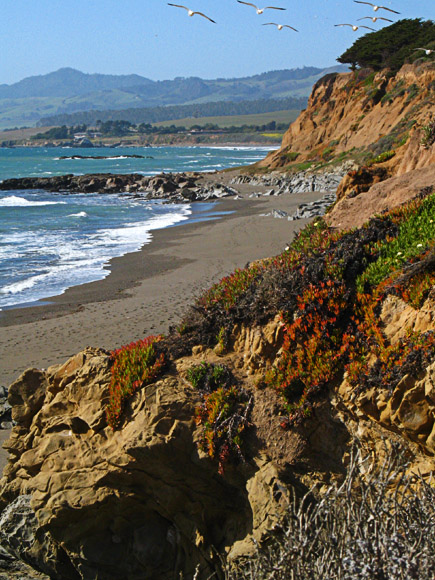 Further north is San Simeon and the Hearst Castle. A pier built by William Randolf Hearts still stands here. It is said to offer good fishing for mackeral, perch, and smelt. 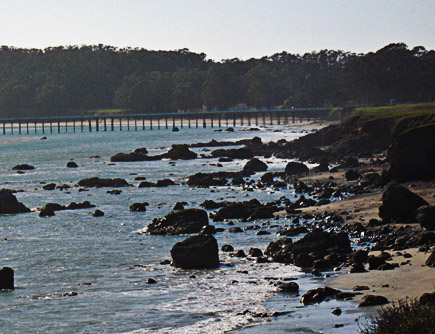 A few miles further up the coast is the Piedras Blancas Lighthouse. Unfortunately, it is not accessible to the public. Its original Fresnel beacon lens was removed and replaced by a more functional but less delightful modern device; the original is now in downtown Cambria. 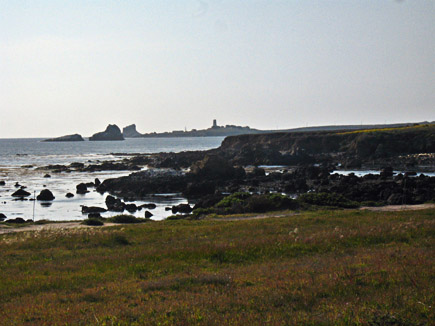 On the shore near the lighthouse elephant seals laze. They mate in March and pups are born in February; in 2007, 4000 pups were born in this rapidly growing colony. After mating the males head north to Alaska, while the rest of the herd follows in a month or two. By midsummer, however, they will be back at Piedras Blancas, only, as I understand, to travel north again before fall and return once more in November — their comings and goings are complicated and confusing. What are these big lugs thinking?

These creatures resemble giant belicose (but slothful) mamalian slugs, or manatees without the charm. Despite this lack of a cuddly Bambi factor, there is something exciting about encountering these enormous (the males was up to 5000 pounds) residents of the Pacific coast. 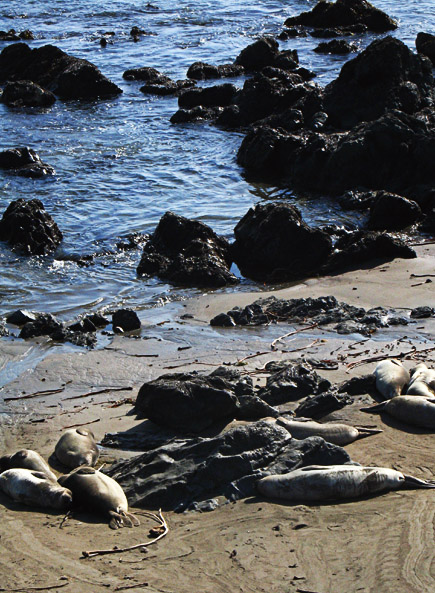 Just down the road from the Fiscalini Ranch Preserve in Cambria on the central California coast is a small country park called Lampton Cliffs. 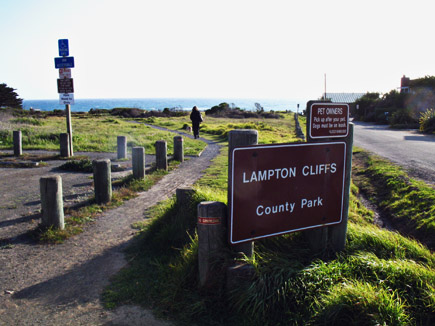 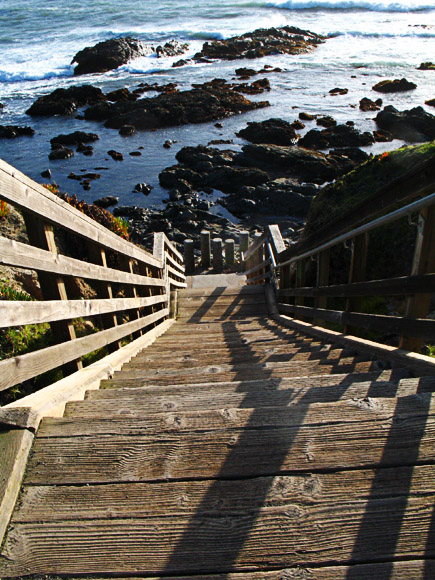 Near the park is an open area that is marked as an ecological study zone. This is fenced and closed to the public. 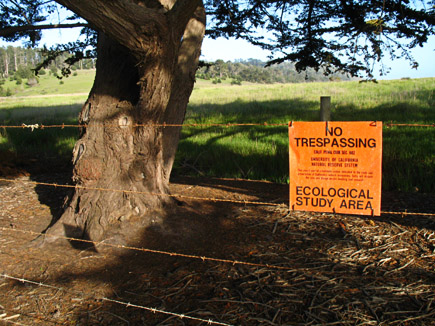 I don’t know what kind of ecological study the University of California is doing here, but the ecology of the nature reserve seems imperfectly balanced — there were at least a couple dozen deer lounging in the meadow. 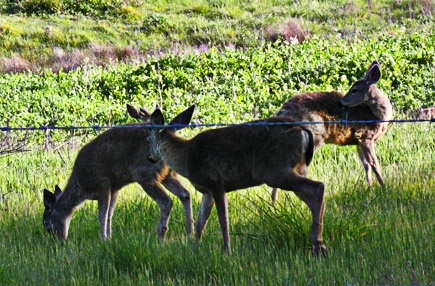 The struggling town of Martinez at last has a bona fide tourist attraction — the delightful beavers who have built a dam downtown on the Alhambra Creek. Some of the videos featuring these YouTube stars can be seen above and below.

So, if you’re Martinez, how do you capitalize on this attraction? Do you go all out and set up elaborate viewing stations or do you play it low-key and let people wander around town until they find the beavers on the own. Already the beavers have been drawing crowds.

Well, again if you’re Martinez the answer is: neither of the above. Instead, city officials have called for the beavers to be killed — or, as they put it, “humanely depredated.” It seems the beaver dam could cause flooding. But in that case why kill the beavers instead of relocating them?

Martinez, by the way, in the home town of John Muir, founder of the Sierra Club.

Each fall the tarantulas come out on Mount Diablo to mate. We saw a couple this year and read about a couple of cyclists — Mt. Diablo is popular with high-endurance mountain bikers — who got so distracted by a pair of mating tarantulas that they crashed into each other and had to be hospitalized.

It looks like this fellow might have been captured and taken home by someone. But what do you do with your tarantula after you get him home?

Are there great white sharks in San Francisco Bay?

Good question! And here is the answer: 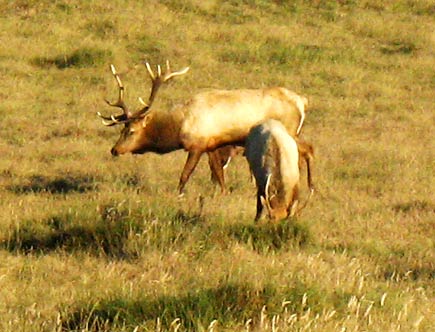 According to the Chronicle, a great white shark took offense at a red kayak in the waters near San Mateo. A guy identified as “Dan” was fishing for rockfish from the kayak at the time of the attack.

When the shark hit the kayak Dan was thrown into the water, from which vantage he observed the shark using the bow of his boat as a toothpick. Nonetheless, he decided his best strategy was to get back into the vessel, “even though it was still on the nose.”

At that point the shark shrugged off the boat in disgust and swam off, no doubt muttering bitterly to itself about ocean polution. Dan headed in the opposite direction at high speed, despite again falling out of the kayak, which had become unstable, a couple of times along the way. After a while he was hailed by a friend who asked, “How did you do?”

It’s not just San Francisco. Sea lions everywhere seem to be getting feisty. Last year, in a reenactment of The Wild Bunch, a renegade gang of sea lions took over a marina in Newport Beach and sank a yacht that was harbored there. And in Alaska a couple of years ago a sea lion jumped into a fisherman’s boat, pulled him out, and nearly drowned him.

No one’s sure why the sea lions are in such a foul mood. Some speculate that agricultural runoff and other polution, which can lead to the poisoning of the animals, may be at fault. Others say they’re just in a cranky mood. Whatever the case, these guys can weigh 1000 pounds, so consider keeping a little distance.