It’s a pity — at least from the standpoint of spectacle — that the Sutro Baths, a large swimming pool complex built in the nineteenth century, proved impossible to maintain. The baths were destroyed in 1966, when they burnt to the ground. The Cliff House project has a page with many historic photos of the baths, such as this one: 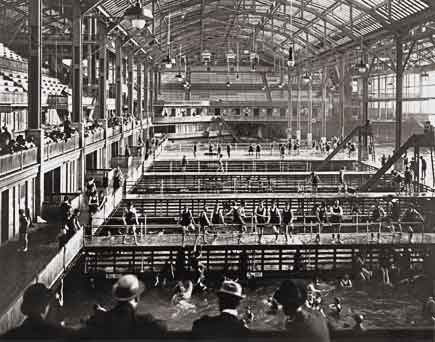 The baths were the brainchild of Adolfo Sutro, a leading Frisco fat cat who first made his fortune in the Comstock silver mines and ended up owning most of the Western part of San Francisco.

The baths opened to the public in 1898, promoted as the largest indoor swimming facility in the world. There were seven pools with varying temperatures (at ten degree intervals), from chilly to steaming. Trampolines, flying rings, slides, swings, toboggan slides, and diving platforms were placed around the pools for plunging in style. 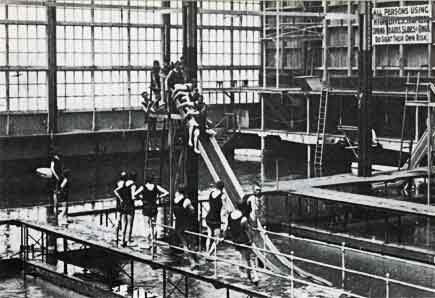 The vast scale of the baths proved their undoing. Operating and maintenance costs were so high that Sutro’s heirs were unable to keep them running. At the time of the fire they were already in the process of being demolished. The Cliff House Project has before and after photos (and many more photos than I am showing here, as well as links to other sites).

Today the ruins of the baths can be visited. Later I will add one or two of my photos of them.