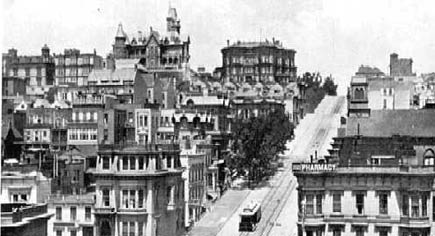 Most people think of the Bay Area as a hotbed of liberalism. Which it is. But the region was also host to a passel of robber barons. Several of these immensely wealthy industrialists settled on a hill overlooking downtown San Francisco — “the symbolic nexus of all old California money and power,” as Joan Didion called it — which consequently became known as Nob Hill.

One of these was Leland Stanford, president of the Central Pacific Railroad and founder of the university that bears his name (actually, the name of his son, Leland Stanford, Jr., who died of typhoid in Florence, Italy, as a teenager). At the time Stanford built his Nob Hill mansion it was the largest private residence in the state. In the image above, from 1902, it is the large building at the center top; the Mark Hopkins mansion is the turreted building to its left.

During the early 1860s Stanford served as governor of California. Ironically, for one who made his money from the railroads, in his inaugural speach he promised to protect the state from “the dregs of Asia.”

No one would deny that Stanford is an excellent school. Still, the legacy of the robber barons has not completely disappeared. Now the same school that gave us Condoleezza Rice is welcoming Donald Rumsfeld as a visiting fellow at Stanford’s Hoover Institution.

According to the institution’s director, John Raisian, Rumsefeld will participate in a task force devoted to world peace.

UPDATE, 26 Sept. 07: Jon Carroll calls for Rumsfeld to be shunned.