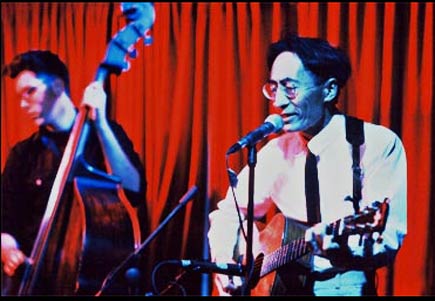 He’s Toshio Hirano, originally from Japan. He teaches in San Mateo by day. But at night another dimension emerges, as he plays his guitar and sings in south of Market clubs — and what he most often sings are the songs of Jimmie Rodgers.

He became fascinated with Rogers as a college student. After graduation, he toured Appalachia. A few years later, he worked at a restaurant in Nashville, where he met some country stars. He has lived in San Francisco since 1986.

For the full story, see the SF Chronicle article by Joel Selvin. Or visit the singer’s website. Just be sure to listen to this clip of his rendition of peach picking time in Georgia.