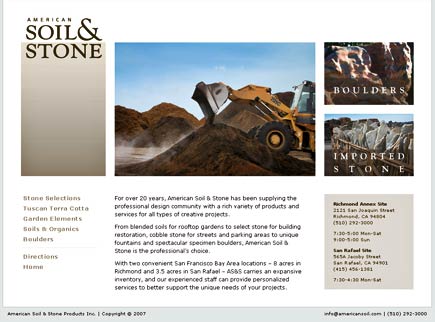 Mr. Vista has finally finished filling in his old swimming pool, which was built in the 1950s. He topped up the job with some local hero veggie mix from American Soil and Stone.

Dirt, as Jon Carroll has observed, is hardly dirt cheap. I think local hero runs around $35 a cubic yard. But it’s a good mix for the typical bay area garden. The base is a sandy loam, which is amply amended with organic compost, chicken manure, rice hulls, grape compost, fir bark, and cocoa bean hulls.

American Soil and Stone — I won’t use their acronym — has branches in Richmond and San Rafael. Where we live they delivered a truckload (10 cubic yards) for $55. They got the address mixed up though (fortunately the mailman was passing by and straightened them out), and they dumped the load in the street rather than the driveway as requested. So I recommend being at home to accept the delivery (we were having lunch at Chez Panisse when they came by).