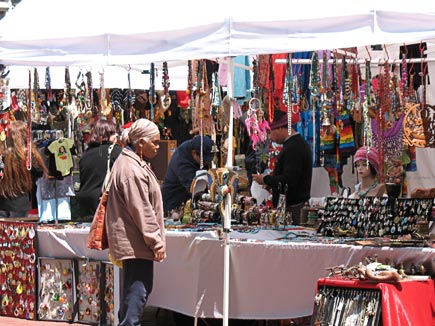 United Nations Plaza was conceived as the entrance to a grand walkway leading from Market Street to City Hall, a vision that never quite materialized. The plaza commemorates the founding of the United Nations in San Francisco.

On Wednesdays and Sundays the plaza hosts a farmers market, while an arts and crafts fair holds sway on most Tuesdays, Thursdays, and Fridays. In the photo above the fair is at its colorful best (but sometimes it is a little too colorful).