Go ahead, make a reservation to eat out in Oakland. It’s probably a little safer today than it was yesterday.

Oakland has been shaken by a series of takeover-style restaurant robberies. Now a suspect has been arrested, and warrants issued for two more.

The arrested suspect is a 16-year-old boy from San Francisco, and one of the warrants is for a 15-year-old.

There. Now don’t you feel safer?

via A Better Oakland 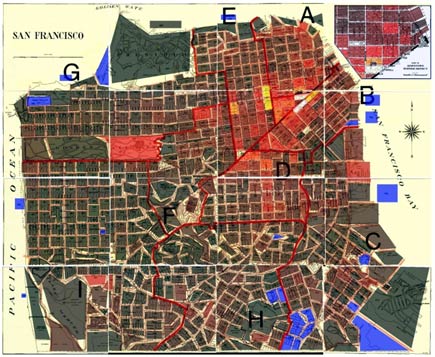 Kesteloot mentions the significant caveat that “The color represents the number of crimes, but really it should represent the number of crimes per unit area, since some plots are much larger than others. For example, just below the two bright yellow plots are two smaller plots that are suspiciously dark. Itâ€™s probably because theyâ€™re smaller that their numbers are lower in absolute terms. ” Maybe this is also part of the reason Golden Gate Park looks dangerous. Probably some people had things stolen out of cars, but I have parked there many times without a problem or a worry.

Still, it’s a suggestive visualization. Yellow represents the highest number of crimes. See the bright yellow areas in midtown between Polk and Larkin? That’s where I eat lunch most days.