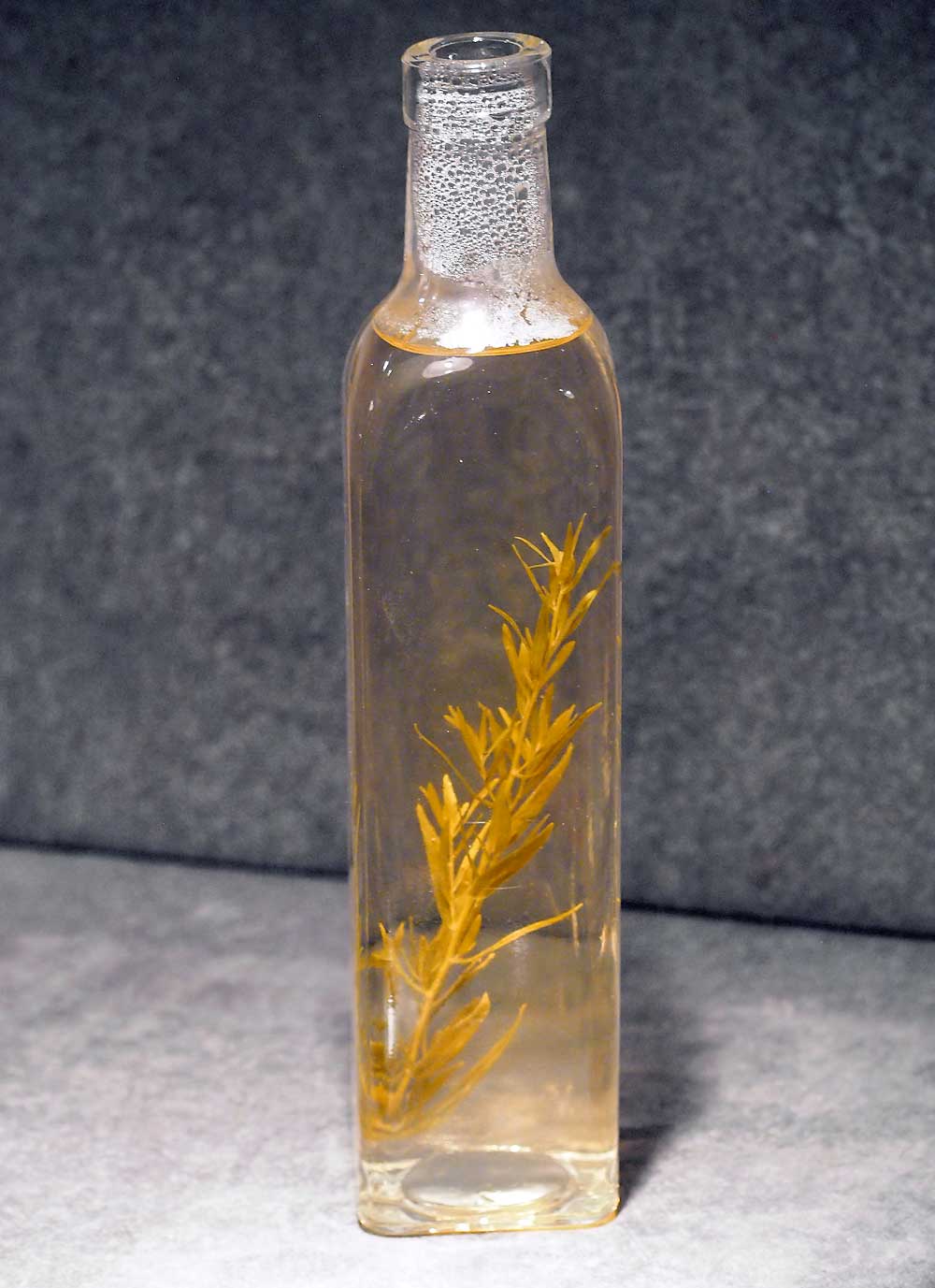 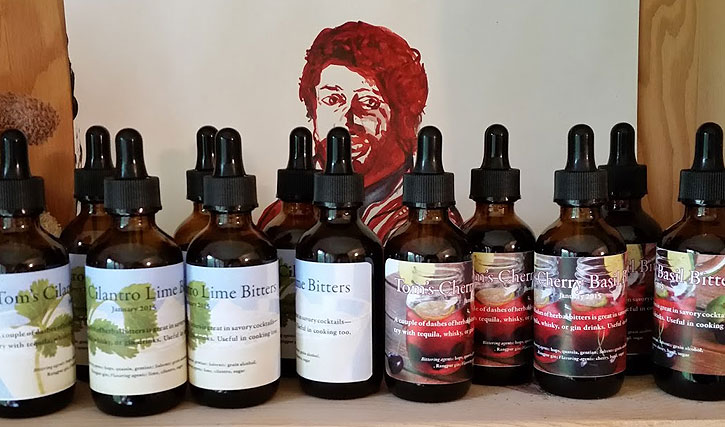 A selection of Tom’s Herbal Bitters

For my next two batches of bitters I followed a base herbal bitters recipe from Mark Bitterman. He uses three bittering agents in his herbal bitters: I tsp gentian, 2 tsp quassia chips, 1 tbs hops, together with 2 tbs double strength simple syrup. He combines Everclear grain alcohol and botanical gin in the ratio of 4:1. No doubt it’s best to use the highest-quality herbal gin, but that stuff is pretty expensive, so I just used Rangpur Tanqueray, which seemed to work. To this base he simply combines fruit pieces and fresh herbs in fairly hefty quantities. I used basil and dried cherries in one and cilantro and lime in the other. These and other recipes can be found in his Bitterman’s Field Guide to Bitters & Amari: 500 Bitters 40 Amari 123 Recipes for Cocktails Food & Homemade Bitters (Andres McMeel, 2015).

I stopped infusing after 5 days. After that point the tannins start to dominate, and I didn’t want to lose the fresh herb and fruit flavors. I put the canning jars full of ingredients in a dark place and shook them several times a day. I strained the mixture through a gold coffee filter, and then through a funnel with a double layer of cheesecloth into two-ounce amber bottles with droppers. I chose the two-ounce bottles because I want to be able to carry some with me on airlines to give away. (I washed the bottles first with soap and water and then dried them as best I was able.) 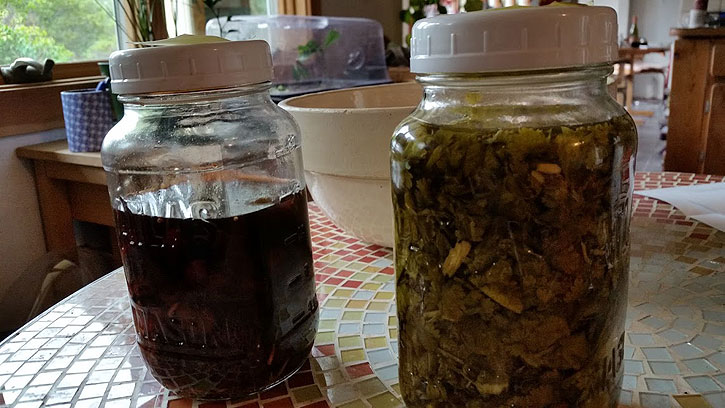 Canning jars in which herbs and fruit chunks are infusing. (Dates of preparation are are on the lids, not shown.)

Bitterman says that herbal bitters are especially good in cooking. A few drops of cherry bitters might be interesting with maple syrup buttermilk pancakes, I imagine. But I prefer them for savory cocktails using spirits like tequila, whisky, or gin. The cilantro lime bitters should work well with Mexican menus. The Bollard has some suggestions for tequila cocktails, and you can get some ideas from Yummly too. And there’s a Cherry Basil Collins recipe at Cocktail Puppy. Generally you have to be a little creative, since older recipes presume Angostura are the only bitters you can find (unless you’re in New Orleans and can get Peychaud’s). Now there are hundreds of commercials bitters as well as more people like me making their own. 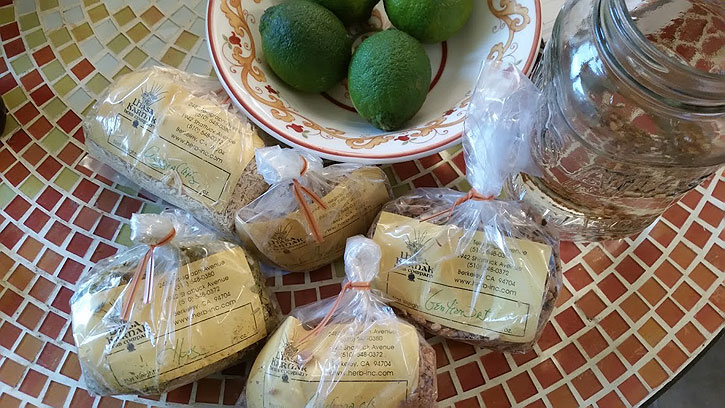 Some ingredients for herbal bitters

Happily, my limes seem to have survived our stretch of frosts. I don’t grow cherries, and I used dried cherries from the supermarket. I bought the dried herbs I didn’t grow myself from Lhasa Karnak in Berkeley — highly recommended.

I make my labels with 2 x 4 in. Avery labels, using InDesign template 5163. I size the background image first in Photoshop. The font is Garamond Premier Pro, the same I used in 1616: The World in Motion; River of Ink: Literature, History, Art; and many other books. 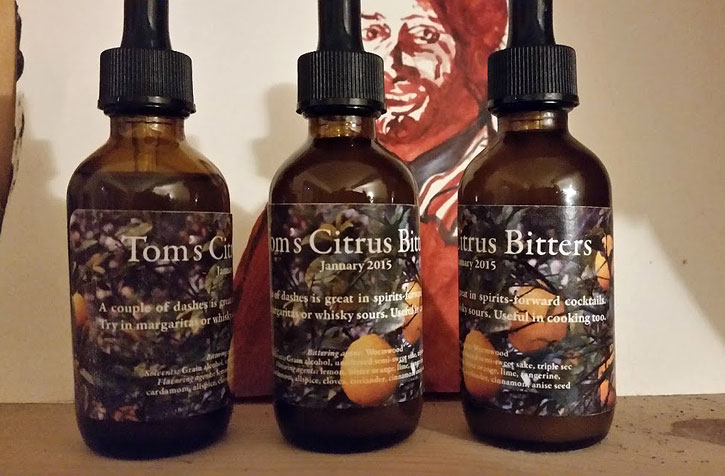