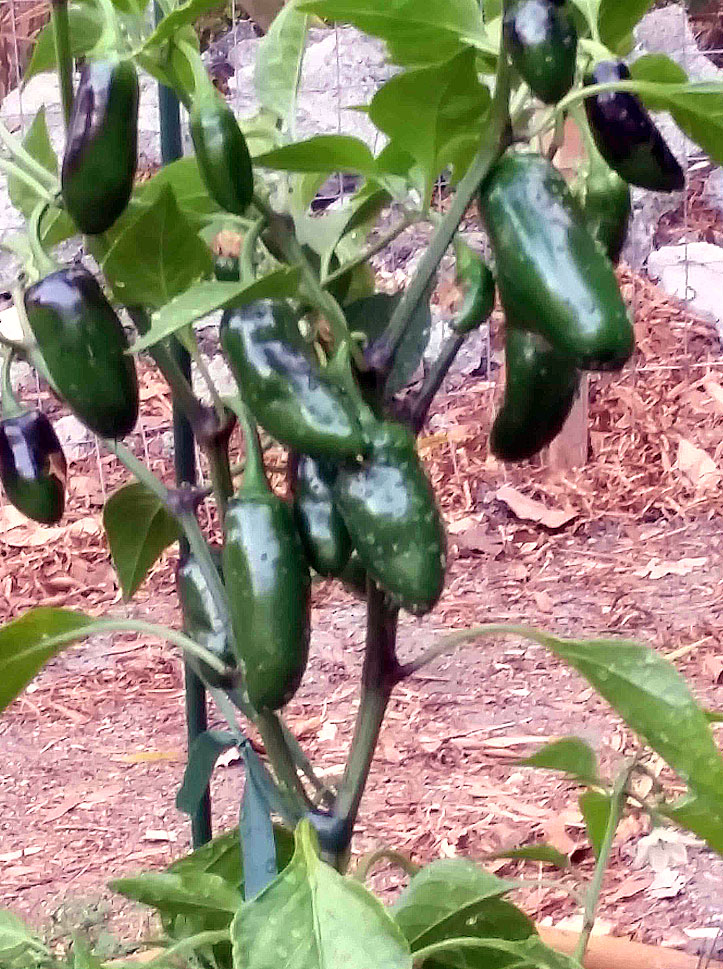 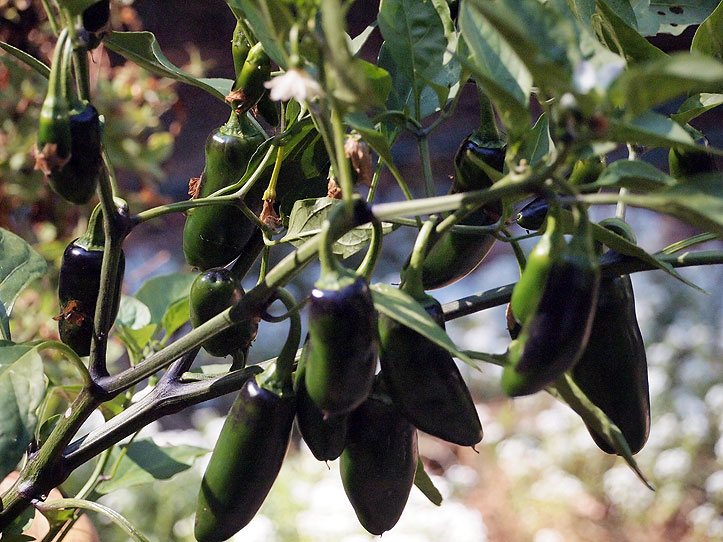 French Laundry reservations are notoriously hard to get, and if you do get in you will pay a bundle for your good meal. But if you enjoy gardens you can still visit the restaurant’s dedicated vegetable and herb garden, which is free and open to all. It’s located right across the street from the restaurant in Yountville.

It’s a pretty no-nonsense working garden. The layout is posted on a signpost across from the restaurant on Washington Street. 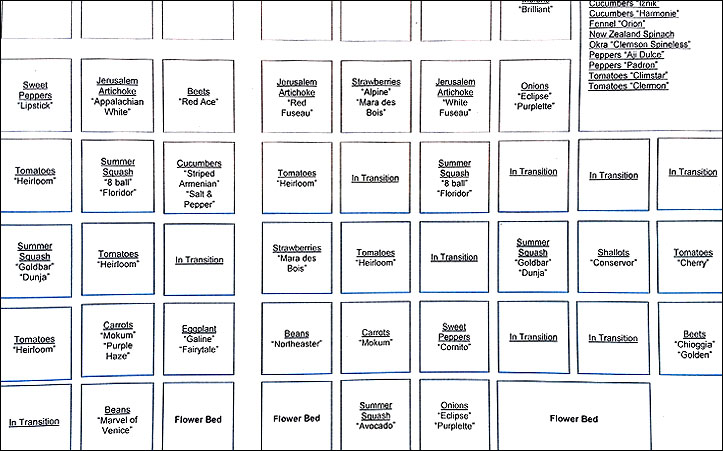 You might see workers shelling beans, harvesting crops, or working in the garden. 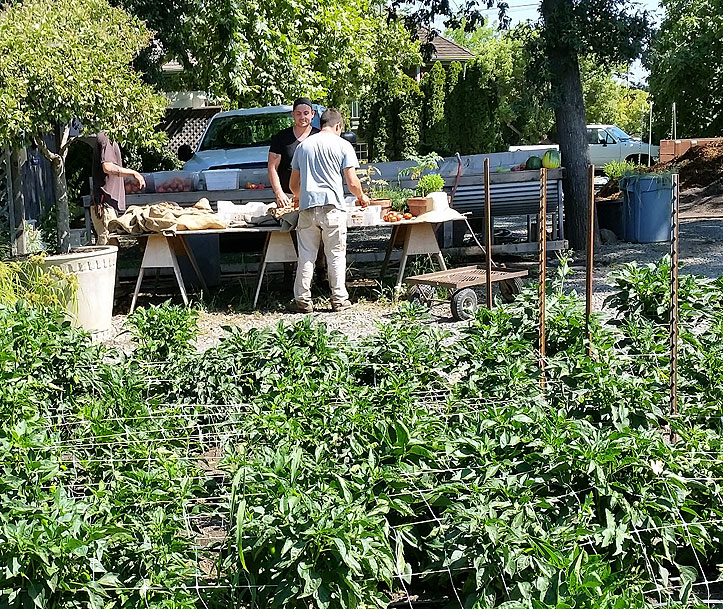 Chickens are kept in a tidy pen, where they are provided with a nice secure house and a patio umbrella. 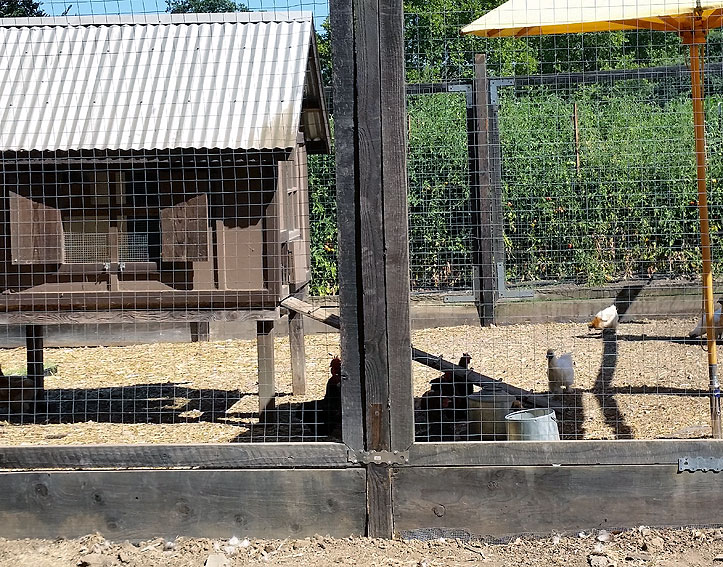 Bees are kept as well in a couple of locations.

Many crops are grown in a large but simply constructed greenhouse. 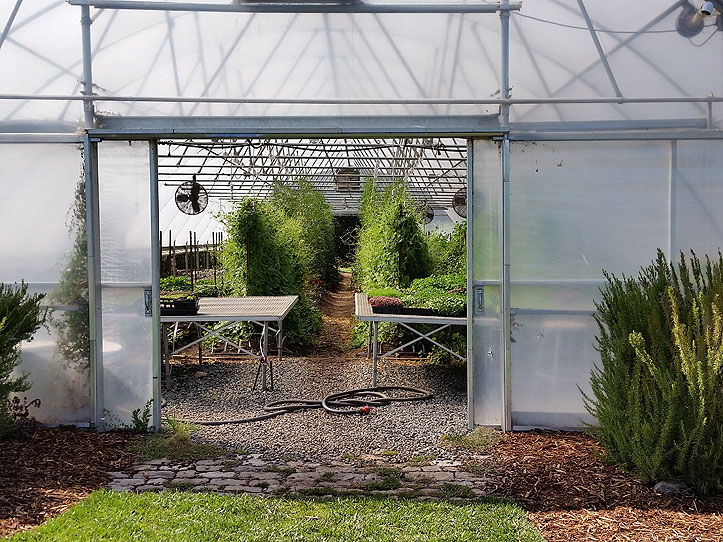 Among the plants grown in the greenhouse are a large number of tomatoes (many more are grown outdoors). I was interested by the French Laundry Garden technique of growing their greenhouse tomatoes, which maximizes vertical space while minimizing horizontal sprawl. (Notice the string and plastic clips at lower right in this photo.) I will discuss this in a subsequent post. 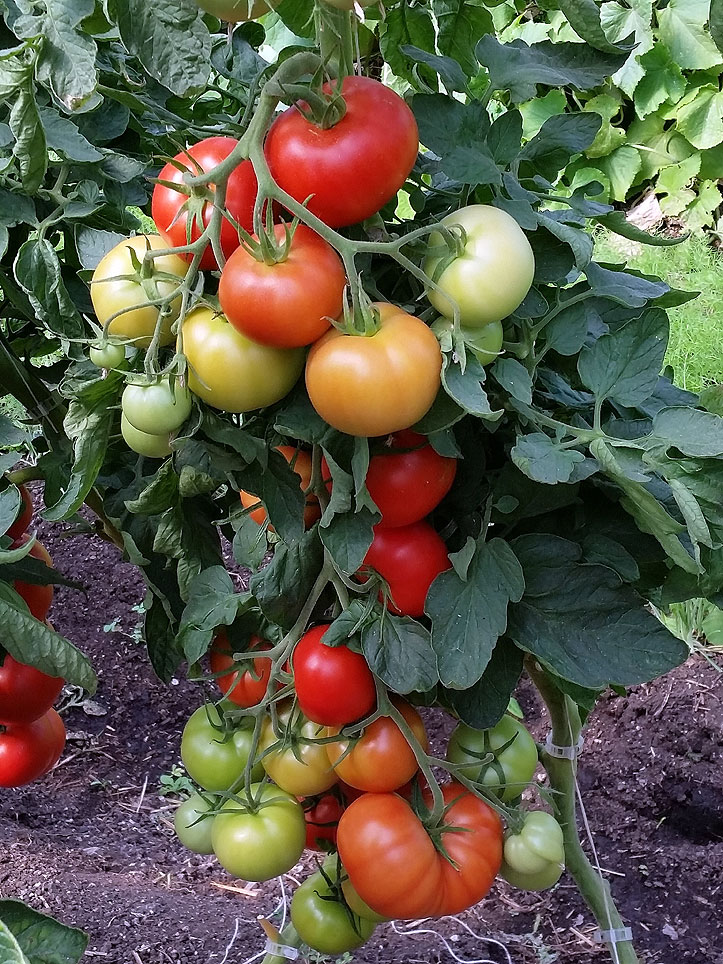 Spaces between the gardens are covered with grass (which I found a little odd, but must provide on-going employment for the weeders). The garden is completely flat and easy to navigate even for those with mobility issues. So have a visit. You can sit and take in the scene on one of the benches and tables provided. 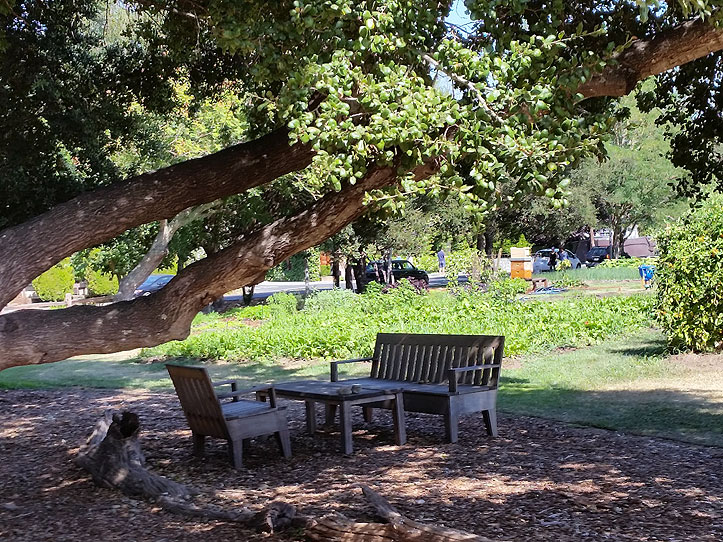 This somewhat cheesy video from the late 1930s catalogues the tourist attractions of the city. It’s a pretty thorough survey, and there are a lot of great clips included. The Bay Bridge had only recently been built.

At least the narrator can pronounce Kearny (rhymes with “carny” not “gurney’). 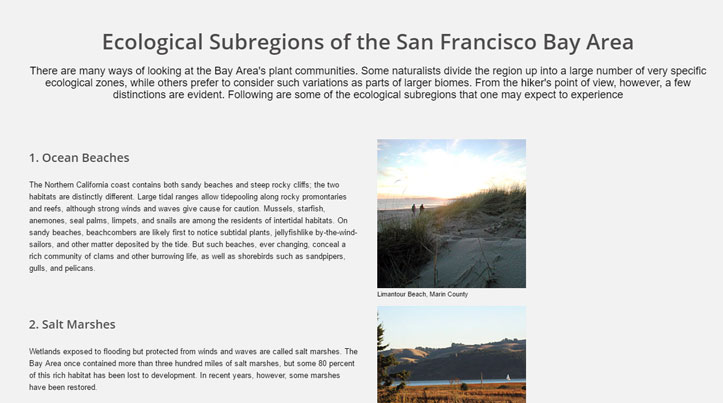 The screenshot above links to my page on Bay Area bioregions. The content was produced quite a while ago, but I’m gradually updating my pages to be more mobile-friendly.

I’m teaching myself Bootstrap, which allows you set different breaking points for different device sizes. It’s not too difficult in its general principles — it’s a little similar to the 960 web approach I used on some pages at rightreading.com — but it’s certainly a new approach compared to the old-school webwork I began with, and there are still some features I don’t fully understand.

I started the redesign with the friscovista.com homepage, and I’m continuing with the more popular pages on the site. Apart from the blog, this page on “Ecological Subregions of the San Francisco Bay Area” still gets the most hits.

All my texts and photos of the example biomes. Maybe later I will link the images to larger versions. 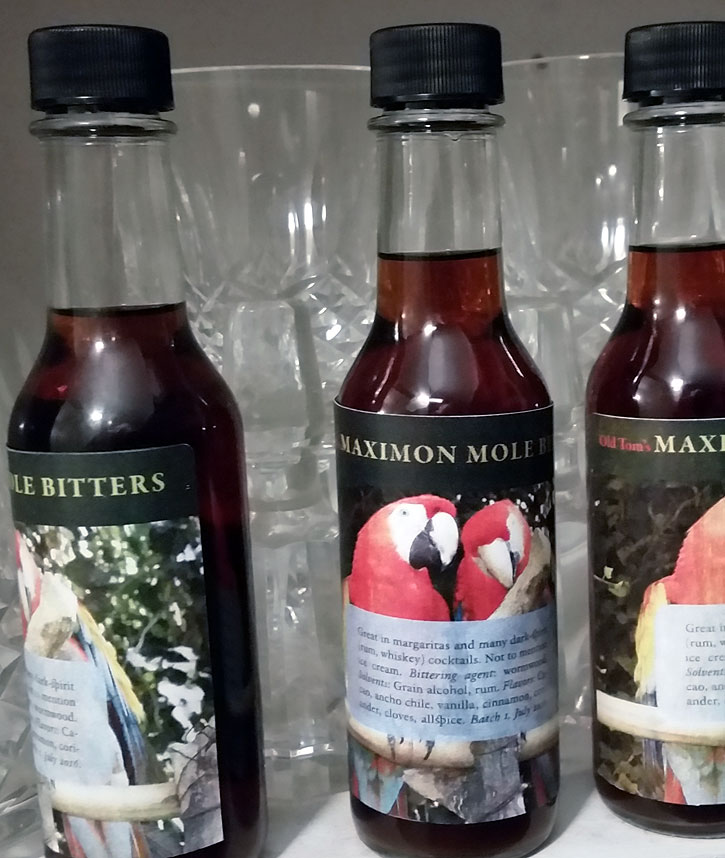 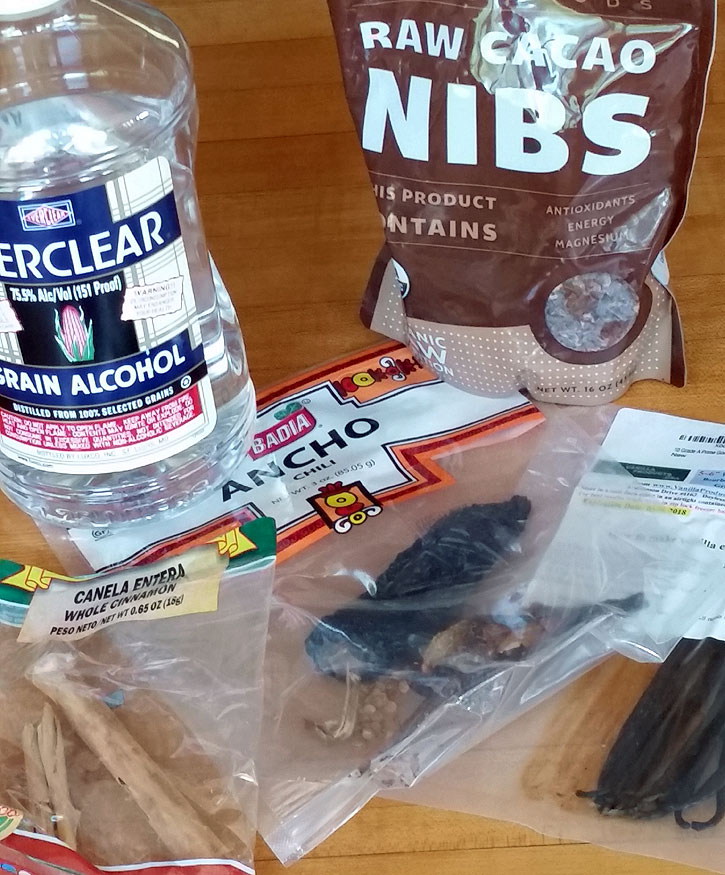 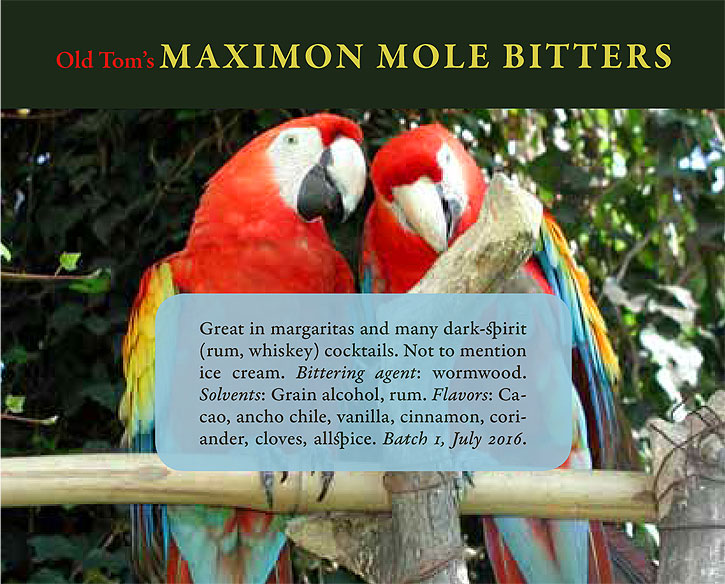