The city would not at first seem an AskMen kind of place. But they rank it the third best city in the world to live in (after Chicago — hey, they’re men’s men, the cold and wind don’t bother them — and Barcelona, and before London and Sydney). This is mainly, I guess, because it is one of the healthiest sizeable cities, it is tech savvy and has a “culture of innovation,” and the people are educated and smart.

But they’re a little confused about at least one thing. “The city’s boy-to-girl ratio (male: 51%; female: 49%) doesn’t seem promising at first,” they write, “but remember this is San Francisco, so you can shave a good 8% to 10% off the competition right there.”

I guess if you ask men, only the guys are gay.

How much income would legalizing marihuana bring to California?

Rebecca Cathcart, writing in today’s NYT about Gov. Schwarzenegger calling for a study of legalizing marijuana in California, says:

Sales could raise $1.2 billion to $1.34 billion in annual tax revenue, some estimates say.

But that would be little salve for the state’s deficit, which could reach $20 billion in 15 months if ballot initiatives proposed by the governor do not pass….

But surely the economic consequences of legalizing marijuana are more complex that just straight tax revenue on direct sales. Two consequences that come immediately to mind:

This is why the governor is acting sensibly (for once) in calling for a study. 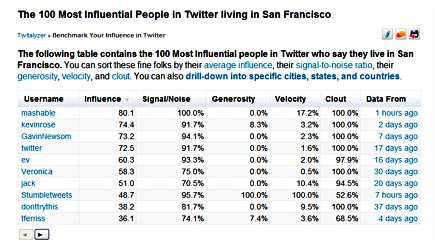 For them as cares, Twitalyzer offers a list of “the 100 Most Influential people in Twitter who say they live in San Francisco.” Gavin Newsome is number three.